oiffeur’s art was very sophisticated by the Buddha’s time and both men and women paid a great deal of attention to their hair. Women favored parting their hair in the middle (dvedhasira vibhatta), wearing plats (veni, Ja.II,185) and applying sandal oil to it both to perfume it and make it glisten (Ja.V,156). The courtesan Ambapali used to wear her glossy-black hair curled at the ends, with flowers in it, well-parted with a comb, decorated with gold ornaments and adorned with plats (Thi.252-5). When Nanda left to become a monk, he looked back and saw his girlfriend with her ‘hair half combed’ (upaddhullikhitehi kesehi), an image that later he couldn’t get out of his mind (Ud.22). For men, sikhabandha consisted of twisting long hair and a long cloth together and then tying it around the head into a turban (D.I,7). Boys would wear five topknots or bums called culaka (Ja.V,250) and women would sometimes have a jeweled diadem attached to theirs (Ja.I,65). Buns on the back, top or the side of the

head were also popular. Bees’ wax and sometimes banyan tree sap was applied to slick the hair down (Vin.II,207) Men trimmed their beards, wore them long, grew goatees (golomikam karapenti), and shaped them into four points. They would also pluck out grey hairs to disguise the fact that they were getting old (Vin.II,134). Some ascetics wore dreadlocks (jatila), i.e. the hair matted into long braids and allowed to either hang down or be tied together into various shapes. When the braids were tied into a bun on the top of the head it was called jatanduva (S.I,117). Some ascetics wore topknots (sikhabandha) while others shaved their heads or pulled their hair out (D.I,167). Brahmans probably 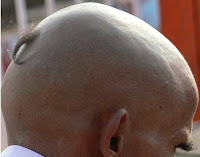 shaved their heads except for a small part at the back which was left to keep growing, as they still do today.
The Buddha asked his monks to keep their heads and faces shaved and nuns to keep their heads shaved, probably for hygienic reasons and to lessen vanity (Vin.II,207). Nuns were expected to shave their under-arm and pubic hair which was a sign of respectability in women (Vin.III,260). Monks were also asked to cut the hair in their noses if it got too long so as to avoid having a curious or unpleasant appearance(Vin.II,134) .
Posted by Shravasti Dhammika at 12:15 AM

The other Biblical reference to hair is in the Nazirite vow. A Nazir is one who is consecrated to the deity is some way — and is set apart by not drinking wine, grape juice or any grape products, and not cutting the hair on the head.

Samson was a Nazir from birth, and so the cutting of his hair by Delilah was a breaking of his vow which sapped him of his strength. Or at least that's the whay the story goes.

That was an interesting article. I always thought the Buddha asked monks and nuns to shave their heads for vanity or conformity reasons; I never thought about the hygienic reasons.

Nuns are discouraged from shaving those areas:

"Should any bhikkhunī have the hair in the "confining places" (armpits and pelvic areas) removed, it is to be confessed."

Apparently, there was a mistranslation:

"Horner, when coming to this rule in her translation of BD (in the volume first published in 1942) converted this rule to the exact opposite of its actual meaning, thus: "Whatever nun should let the hair of the body grow, there is an offence of expiation." However, when she came to the parallel rules for the bhikkhus (in the volume of BD first published in 1952), she realized her earlier mistake and, in footnote 2 on page 186, noted that the verb here means to "remove" rather than to "grow." N (published in 2001) apparently missed this footnote, and so repeated the earlier mistake."

The Chinese translation of this "rule" for nuns is also NOT to shave.

Dear Pat, thanks for this most interesting info. I relied on Horner’s translation but now I’ll check the text.

Did you know that you can make money by locking premium areas of your blog / site?
Simply join AdscendMedia and run their content locking plugin.