Death And Rebirth In Mongolia 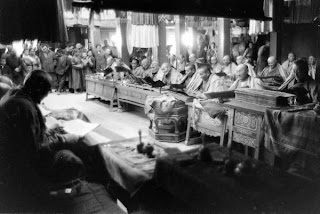 Communist repression in Mongolia had its climax between 1937 and 1939 The purges affected the whole country, although the main focus was on upper party and government ranks, the army, and especially Buddhist monks. The usual accusation was collaboration with supposed pro-Japanese spies. The number of people killed in the purges is usually estimated to have been between 22,000 and 35,000 people, or about three to four percent of entire Mongolia's population at that time. Nearly 18,000 victims were Buddhist monks. Some scholars give much higher estimates, up to 100,000 victims. The closure of all but one monastery and destruction of all but a few meant that Mongolia's cultural landscape was changed forever. Ganden Monastery in Ulaanbaata, the capital, was closed in 1938 at the height of the purges but reopened in 1944. It was the only monastery in Mongolia to remain functioning mainly for propaganda purposes.
A series of mass graves were investigated in 1991 in Moron and in 2003 near Ulaanbaatar. This second grave was estimated to have about 1000 bodies in it. The corpses of hundreds of executed lamas and civilians were unearthed, all killed with a shot to the base of the skull. The Museum of Victims of Political Persecution in Ulaanbaatar is dedicated to the victims of the purges. One of the exhibits is a row of skulls with bullet holes dating from the time of the purges. Mongolian Buddhism has been struggling to reestablish itself after 70 years of Communism and only about 50% of people now identify themselves as Buddhists. Christianity had gone from nothing in 1990 to about 35000 today.
Have a look at this absolutely fascinating documentary made in 1991 about the tragic but little known fate of Buddhism in Mongolia. It contains rare footage of Mongolian religion and culture in the 1930s and 40s. it is in five parts and goes for an hour.
http://www.youtube.com/watch?v=5TS7pGGGouo&feature=related
Posted by Shravasti Dhammika at 2:15 AM

A truly remarkable film, and many thanks for posting it.

Also see this wonderful film about the herdsmans' life on the plains on Mongolia.

The link is not working