Divorce is the legal ending of a marriage. In many religions, marriage is a religious act and thus there are various restrictions on divorce. In some religions such as Christianity, divorce is possible only if one partner commits adultery while in other religions, divorce is allowed but is the prerogative of the husband only. The Encyclopaedia of Buddhism has no entry of divorce and even the entry on marriage does not refer to it either. The new Encyclopedia of Buddhism (Macmillian Reference USA, 2004) doesn’t have an entry on divorce or marriage either and the only reference to marriage is to clerical marriage. Does this tell us something about Buddhism?!!
I have been unable to find anything in the Tipitaka that the Buddha says about divorce, indeed I can’t even find a Pali word for it. Likewise I have been un 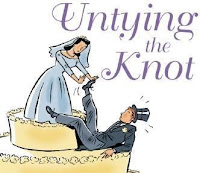 able to find any incident of divorce in the Tipitaka. However, there are at least two stories in which a man decides to become a monk and in one case just walks out on his wife, and in another he tells his wives that he will give them to any man they would like to be given to (I cant find the references right now but they are there). It would seem that while marriage was a formal matter, divorce was informal. If a wife didn’t like her husband she just went back to her family and if a husband didn’t like his wife he just told her to leave. In the Jatakas there are several stories where a husband puts his wife away (e.g. Ja.II,115). More interestingly, in the Godha Jataka, the Bodhisattva tells a woman that if her husband does not love her and treats her with disrespect, that she should leave him (Ja.III,107-9). He gives her this sound advice -
Revere the reverent, honor the honorable,
Be dutiful to he who does his duty.
But don’t help one who does you harm,
Or give your heart to one who loves you not.
Leave him who does not care for you,
Who would without a thought abandon you.
Finding that the tree has no fruit,
The wise bird flies off into the big wide world.
In later Hinduism it seems that it was impossible for a wife to leave her husband although a husband could expel his wife on whim. This is affirmed by the Ramayana where Rama abandons Sita just on the suspicion that she had been unfaithful. At least in India, probably within both Buddhist and Hindu communities, the fate of an abandoned wife was probably a grim one. In his beautiful book about pre-modern Burma, Soul of a People, Fielding-Hall says that when a young man and woman fell in love they just moved in with each other and if their feelings towards each other changed they just parted company, the woman often keeping the house or taking everything he considered hers with her. Even today apparently, the Burmese government has trouble getting people to register their marriages. I can’t remember what traditional Kandyian law in Sri Lanka says about divorce but as I recall it was regulated by law.
Because Buddhism sees marriage, not as a sacrament but as an agreement between two people or two families, it accepts that if the two people involved agree to end their relationship they can do so. Buddhism and all Buddhist cultures have always seen marriage as a relationship to be treasured and which is worth maintaining but at the same time they have rarely had legal restrictions on divorce (see http://www.buddhismatoz.com/ under Marriage). 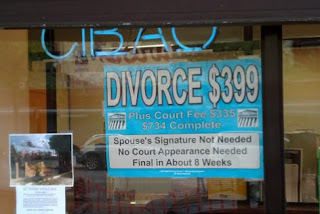 I have always been bewildered by the conservative religious hostility towards and opposition to gay marriage. The usual justification for this hostility is that it ‘undermines the family’. But being just a simple monk I would have thought that the biggest danger to ‘the family’ would be the liberal divorce laws in most developed countries. And there is no doubt that such laws have had an impact on divorce rates. In the US in 2008 40% of marriages ended in divorce and in the UK in 2007 11.9 per 1000 of the married population got divorced. And then there is co-habitation, living together without being married. In my country Australia a whopping 22% of couples were co-habiting in 2005 rather than being married. In the US in the same year 4.85 million couples were co-habiting. It is even illegal in seven states but the law is no longer enforced. Isn’t it strange that religious conservatives are not campaigning against liberal divorce laws and pressing for the criminalizing of co-habitation in the name of ‘the family’. In Australia they now have a political party called Family First Party led by an Assemblies of God pastor. The party predictably opposes same-sex marriage but just as predictably is silent about the country’s burgeoning divorce rate and high rate of co-habitation.

Posted by Shravasti Dhammika at 7:01 PM

Is that the tibetan and thai etc... monks are so ignorant of buddhism that they habitually confer christianity imitating marriages all over the world ????
Or is it just cultural adaptation ??

We should add that in christianity too marriage was NOT a sacrament for more that 1000 years!( The figure is from memory and it may be inaccurate). This can be seen as buddhist influence in Europe that caused it to remain a secular affair for such a long time.