Anyone who, like myself, takes an interest in the archeological history of Buddhist places in India will know the name J. P. Vogel. The Archeological Survey of India reports dating from the early 1900s onward contain numerous articles and reports written by him. He excavated, amongst other sites, Kusinara and Savatthi. Although I have long been familiar with his name I have never known anything else about him. The other day I stumbled upon a book called A Vision of Splendor, Indian Heritage in the Photography of Jean Philip Vogel, 1901-1913 by Gerda Theuns-de Boer, published in 2008. This really is a discovery for me. It contains numerous beautiful black and white photos of so many Buddhists sites and artifacts taken by Vogel. How fascinating it is to see what these places looked like just before or while they were being excavated. Here, for example are two photos of the Buddha statue at Matha Kaur in Kusinara. 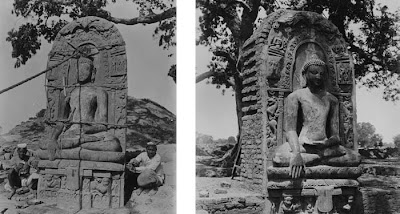 The first is of the statue after Vogel dug it up, and the second just before he built the structure around it and in which it sits to this day (note the freshly-mortared bricks behind it).
The Buddha identified three types of craving – craving for sensual pleasures (kamma tanha), craving for existence (bhava tanha) and craving for non-existence (vibhava tanha). When I see beautiful publications like this one I am convinced that the Buddha overlooked one type of craving – craving for books (potthaka tanha).
Posted by Shravasti Dhammika at 4:25 AM

As always, many thanks. It's wonderful to see the two photos of that Matha Kaur Buddha image. From now on "craving for books" (potthaka tanha) is part of our usual vocabulary.

potthaka tanha :-) I guess that falls under kama tanha :-) - an euphemism for the same might be "gantha dura" ;-)