The Writings Of The Great D. D.

Born in rural Goa in 1876, Dharmanand Damodar Kosambi (not to be confused with his equally brilliant son Damodar Dharmanand) came under the spell of the Buddha’s teachings during his adolescence. As described in his long autobiographical memoir, at an early age he set off on an incredible journey of austere self-training across the length and breadth of Britain’s Indian Empire, halting to educate himself at places connected with Buddhism. His sojourns included living in Sri Lanka to master Pali, in a cave in Burma, and in some viharas of North India - begging for his food all the way - as well as in Nepal and Sikkim which he reached after arduous, sometimes barefoot, treks. During these itinerant years Dharmanand acquired such mastery of the Pali Tipitaka that he was variously appointed to teach and do research at Calcutta, Fergu 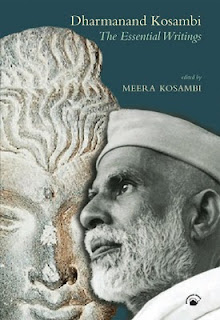 sson Collage, Baroda, Harvard, and Leningrad. His Bhagwan Buddha (1940) remains to this day the most widely-read account of the Buddha’s life in Marathi. Two of his other great achievements were his editions of the Visuddhimaga and of the Subhasitaratanakosa which he did together with V. V. Gokhale. My own teacher, Ven. Matiwella Sangharatana, knew D. D. quite well and I distinctly recall him saying that he was one of the few Indian Buddhists he knew ‘who could think’ which might be a bit unfair. As a thinker Dharmanand blended Buddhist ethics, Mahatma Gandhi’s philosophy of truth and non-violence, and the ideals of socialism. He exchanged letters with the Mahatma, worked for his causes, and most extraordinarily, ended his life in the traditional Jain manner by voluntary starving himself to death at Sevagram ashram in 1947. The process took 30 days. Arguably, no Indian scholar’s life has been as exemplary as Dharmanand’s, or has approximated as closely the nobility and saintliness of the Mahatma’s. Despite his mastery of several languages, Dharmanand chose to write mainly in Marathi because of his strong region-specific commitment. Consequently, very few today even in India are familiar with his copious output in Buddhist studies, and fewer still with his contribution to social and political thought. By translating and marshalling his most significant writings, Meera Kosambi, shows the manifold dimensions of Dharmanand’s personality, and the profoundly moral character of his intellectual journeys. Her Introduction also contextualizes the life, career, and achievement of modern India’s greatest scholar-savants. The book includes for the first time a translation of Kosambi’s long autobiographical essay Nivedan.
Posted by Shravasti Dhammika at 12:09 AM

Why did it take 30 days? If you don't drink you should die much quicker, thus say the modern medical knowledge.
I have heard there are extreme forms of fasting also in some of the buddhist tantras and in the Lotus sutra schools.

It only took 30 days because DD was already old and weak. I have never of heard of fasting to death in any Buddhist tradition but self-immolation (burning oneself to death) was rather common in China, Korea and to a lesser extent in Japan and is praised in the Lotus Sutra.

Srictly speaking it is "not fasting to death", because in buddhism a deed is defined by volition. I don't know the exact motivation in japanese lotus sutra schools, or in the Shingon school, but I have heard of ascetic practices that contain extreme elements of fasting, and it can in some cases happen that to an outside observer it may seem like the person actually passes away from this life. One source said that these practices were forbidden by japanese law in early 1900's, but there were still a couple of cases after this.
In Buddhist tantra there are fasting practices where you live on "nectar", i.e. "chulen" or "amrita". They claim that it is still done, even in modern times. What is the cause or motivation for this? -I don't know exactly, to be Mahayana, or any form of buddhism, it has to have some beneficial purpose or the uber alles bodhicitta motivation !?