I spent the day in the British Library yesterday. At 11.15 I went out to have my lunch and stopped off on the way out to have a quick look at their bookshop. The very first book I saw was Frances Wood and Mark Barnard’s The Diamond Sutra; the Story of the World’s Oldest Dated Printed Book. A sticker on the front said ‘Four Pounds Off’ making it sixteen pounds. I quickly checked my bag. Seventeen pounds! It was going to be either the book or a burger – and of course in a competition like this the book will always win with me. The book is a fascinating account of the Vajracchedika Sutra found by Aurel Stein in the Dunhaung Caves at the beginning of t 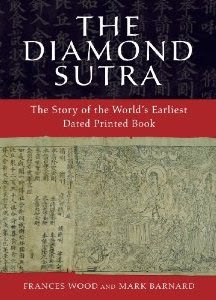 he 20th century. Of course Stein’s a discoveries and adventures in Central Asia have been told quite a few times before and they are reiterated here in chapters 1, 2 and 5. But the book also explains the invention of paper and printing in ancient China, the trials of the famous sutra subsequent to its discovery, its significance and the recent conservation efforts it has undergone.
For those of you who don’t already know this book is one of several thousand copies printed by a man named Wang Ji in 868, making it the oldest known printed book, 500 years older that Gutenberg’s Bible. The colophon reads ‘Devotedly made for wide and free distribution by Wang Ji on behalf of his two parents on the fifteenth day of the fourth month of the Xiantong reign’. Ware and tear on the book shows that it must have been read for a long time after it was printed, perhaps for several centuries, and then confined to its cave. I find it inspiring that the Buddhist custom of printing Dhamma books for free distribution has persisted right up till today. I hope that one of my books that someone printed for free distribution is still in circulation in 200 years later – although I doubt it. Wood and Barnard mention that amongst the other books discovered by Stein was another copy of the Vajracchedika printed for free distribution, although without a date. The colophon on this one says that it was printed by a man in memory of his old ox in the hope that it would be reborn in Amitaba’s Pure Land rather than on earth where it would have to endure so much hardship. So it seems it is not just out own generation that has developed a fond regard for its pets and or domestic animals.
Posted by Shravasti Dhammika at 3:14 AM

Interesting ! Diamond Sutra had a great influence on the chinese culture. Even Non Buddhist (Chinese )also like to read this sutra.

Dear Bhante,I believe that people in the olden days have more respect for animal life than now,where commercialism is the norm

I discovered your blog today. I like this very interesting post. I am looking forward to reading your book in German!

Have a nice day!