The Tsunami: A Buddhist View

I wrote this article after the tsunami of 2004. It seemed worthwhile to reproduce it in light of the terrible tsunami of a few days ago.
Buddhism teaches causation, that the whole universe is a web of interrelated causes and effects. There are two types of causation - natural causation and moral causation. Natural causation has nothing to do with people being good or bad, it is simply a matter of the various forces in the universe acting on each other. A rainstorm or crops ripening would be examples of natural causation. Natural causes can of course have an effect on us - being caught in a rainstorm can give us a bad cold. But suffering from a cold has nothing to do with moral or immoral past actions - it would be a natural effect of a natural cause. Moral causation is about how people think, speak and act and how they feel as a result. The Buddha’s teaching of kamma is only concerned with moral causation. Being helpful to someone, having them thank you and feeling happiness because of that; stealing something, getting caught and then experiencing embarrassment or shame, would be examples of moral causation. The person’s happiness or discomfort are a direct result of how they have acted. The person is not being ‘rewarded’ or ‘punished’ for their actions, their happiness or discomfort is simply a result of their actions. Now let us have a look at the recent tsunami in the light of the doctrine of kamma. 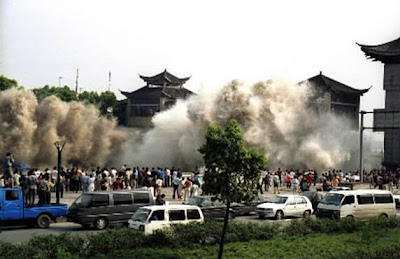 Thank you Bhante for this sound explanation.

Thank you for this article. I think many people (especially lay people) have a very twisted view of kamma that exacerbates the situation in Japan right now. This will hopefully clear the air a little.

Thanks for the sound explanation. May I ask on the way we can dedicate the merits (pu~n~na) to the victims/casualties of the tsunami according to the early Buddhist practice?

Like, is it by chanting "Idam vo...", or "Ettavata...", or also by simple meditation on metta and well-being?

Dear ae2004,
Perhaps when you do metta meditation you could focus on the tsunami victims in place of disliked persons. May I also suggest that you do something concrete, such as make a generous donation to an aid organization helping the victims.

This post explains "kamma" very clear! In the past I would put "kamma" as a reason behind all bad or good events, not realizing the true meaning of "kamma".

May all beings be well and happy always! May we practice mindfulness and realize the Truth through our daily life :)

Bante, you say that pain due to natural disasters and external circumstances is not a result of kamma, but then how does this work in the context of kamma being carried over from past lives? It is generally understood in Buddhist traditions throughout that ones actions in one life do indeed affect the circumstances (particularly external conditions being favourable or not) of future lives.

What of the kammic consequences for those who knowingly cut corners, covered up, and allowed their greed for profit and power to obscure the true dangers of nuclear power? Natural disasters are unpredictable; the nuclear disaster unfolding in Japan (which is also preventing adequate relief from reaching the quake and tsunami victims) is a true crime.

With much appreciation, thank you for providing clarification. We must all pray for Japan and the Tohoku earthquake/tsunami survivors as well as helping in any way that we can, regardless of our faith backgrounds.

Dear Jeffrey,
There are several problems with the idea that all kamma in this life without exception will have its effect in the next life, the main one being – this life IS a ‘next life’. Also, we can often actually see examples of deeds done now having an effect now. I suspect that cases of good people seemingly not getting their ‘reward’ and bad people seemingly not getting their ‘comeuppances’ led people in the past coming to believe that they will ‘get it in the next life’. I also suspect that people in the past (and perhaps many even today) came to believe this because they thought of ‘reward’ for good done and ‘punishment’ for bad, mainly in terms of the concrete, visible and material; i.e. if you were generous you will have a big house and lots of money; if you were mean and jealous you will have an ugly face or some hideous disease. Much vipaka is probably psychological, i.e. a clear conscience, inner peace, happiness, a guilty conscience, anxiety, self loathing, worry, etc.
The idea that external factors are or cause our vipaka brings many problems with it too. The biggest of these is that it would require a cosmic super-intelligence that can arrange the whole universe in such a way that this person suffers, that one experiences happiness and in exact proportion to what was done in a previous life, and that it arranges for this decades before it all happens. In short, it would requite positing a God. If someone says ‘The tsunami is a result of peoples bad kamma in their last lives’ this would mean they believe that decades ago some force in the universe arranged that hundreds of thousands of people be reborn in certain villages or be visiting them on exactly 11 March 2011. This force also arranged for huge quantities of water to sweep inland at a particular time and with extreme care, to demolish this house but not that one, kill this person, injure that one and not affect another, that this one lose their wife but not the rest of their family, etc, etc, etc.
If on the other hand we see our kamma as the way our mind reacts to external (and internal) situations, due to how we have used it during the past, including in past lives, and that this conditions how we feel (pleasant, painful, neutral) then kamma starts to make sense and, at least to me, sound plausible and understandable.
And finally Jeffrey, thanks for contacting me because it has led me to your blog which I have read with great interest and found most interesting. Wonderful pictures too.

Am I right to say that as you are in the samsara, the life of cycle, you will subject to birth , death etc.. and of course tzunami ?
Hope you have a wonderful trip in
England.

From my experience and glimpses into the way kamma works I fully agree with S.Dhammika that it has no direct connection to purely physical phenomena and works in psychological sphere. Every intention, action and reaction creates and affects our mind patterns of behaviour. These patterns can be selfish and unselfish. Unselfish patterns cleanse our minds and hearts, while selfish ones add to our ignorance. What is usually termed as the ripening of kamma is actually similar situations when such patterns are repeatedly used and get additional kammic energy. Until one day such a pattern, such an attitude - when it is selfish - actually lets us down and causes acute suffering.
As to next lives - kamma affects them too - if we die as jealous persons we will remain jealous in our next lives and suffer for it. If we get rid of animosity, envy and jealousy in these our lives, our next lives will be free from these roots of suffering and our spirituality will have a better chance to grow.

Dear Yuri,
Welcome back after a long absence.

Dear Ananda,
Yes that is correct.

Can I say that the Japanese actually have very good past kamma as the attitude and their calmness though it was one major disaster. So far I have yet to hear riots, or breaking in to grocery shops or robbing cases (probably minor ones). Where as everything is systematic, people are very resillient and helpful among each other.

Venerable, one traditional understanding of vipaka is it either being dukha or sukha (otherwise vedanta). Now, by the Buddha's own admission the results of one's kamma can indeed come to fruition in form of favourable and unfavourable rebirths (realms with dharma, hell realms, etc...). This is what I mean when I suggest that karma can result in external circumstances which facilitate either sukha or dukha. Now that doesn't mean every action will have such results, but simply that it can. Again, by Buddha's own word some actions can even have oneself reborn in high cast. That isn't a mental state at all -- that is an external circumstance.

Dear Jeffrey,
Again thanks for your thoughtful comments. You are quite correct in saying that the Buddha said good kamma may result in rebirth in a rich or a high caste family and negative kamma might result in rebirth in a poor or low caste family, etc. (e.g. Kammavibhanga Sutta, etc). However, I feel that this is still mainly referring to one’s experience, i.e. that in most people’s imagination rich and high status is thought of as ‘good’ or ‘advantageous’ and poor and low class or caste as unenviable. But of course more careful thought will reveal that it is on often not as neat as this. Belonging to a wealthy well-educated family in Cambodia during the Khmer Rouge regime or during China’s Cultural Revolution was anything but beneficial. Likewise, in India today certain high castes are actually claiming to be dalits so that they can benefit from government benefits and reservations made available to low castes. So my understanding is that the Buddha used ‘rich’ ‘poor’ ‘high class’ ‘low class’ etc as a sort of easily understandable shorthand for ‘pleasant’ and ‘unpleasant’ experience.

Thank you Bhante. I myself posted something similar when a friend of FB asked me about the Tsunami in japan being Khammic retribution for WW2.I pointed out that not all things are due to Khamma and also that Buddhism does not ascribe to paying for the sins of the father up tp the 7th generation.
With metta, Phra Greg