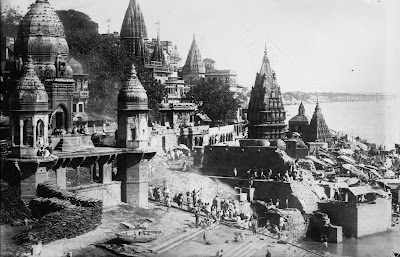 Varanasi, often anglicized to Benares, is Hinduism’s most sacred city. Its name is derived from the fact that it was originally situated between two small tributaries to the Ganges, the Varna and the Asi. To die in Varanasi or to bathe in the Ganges there is the goal of every devote Hindu. In the Tipitaka Varanasi is called Kasi, the city’s oldest name, or Baranasi (D.II,146). The city has long been a centre of religious learning, culture and trade, especially trade in luxury goods. The Buddha said that before he renounced the world he only wore clothes made from Kasi cloth and used sandalwood from Kasi (A.I,145). Archeological investigations have shown that there was a Buddhist presence in Varanasi in ancient times but it was always overshadowed by Hinduism. Isipatana, where the Buddha preached his first and second discourses and now called Sarnath, is just beyond Varanasi’s outer suburbs.
Posted by Shravasti Dhammika at 9:52 AM

Kāsī is the name of the state, Bāraṇāsī was one of it's capitals, though other places had been capitals before. See Malalasekera's article:

seems to be a paradise...

Hardly a paradise! But I hope the vultures are returning to Varanasi. When I was first there I counted well over a hundred visible from my little window over the ghats. Evidently some pharmaceuticals used for cattle has been killing them off. The last time we were there (2007) we saw almost none.

And that's causing a headache for the authorities, because vultures used to take care of the remains of dead bodies, that sometimes rise to the surface of the Ganga.

A paradise? Yes, absolutely. Well, for those, who can see it, of course :D