Bells (gandi) and gongs (kamsa) are metal objects struck to make a noise. Whereas a bell is usually hollow a gong is flat. Speaking of patience and non-retaliation, the Buddha asked us to be like a cracked gong (kamsa upahato) that does not react when struck (Dhp.134). In the centuries after the Buddha monasteries in India and elsewhere throughout the Buddhist world always had bells or drums (bheri) to announce the various times for the monks’ activities. The Pali commentaries mention that certain monasteries in Sri Lanka had mechanical devices (yamayanta) that would ring the bell at designated times. A work called the Ghantastotra (2nd–3rd century CE) and attributed to Asvaghosa, is a hymn to the monastery bell ‘which calls the monks to meditation as a mother calls her children.’ Chinese, Korean and Japanese temples often have wooden bells which are struck to the keep time during chanting. These bells have two fish-like or dragon-like creatures carved in them and are called ‘wooden fish’ (Chinese muyu). The largest functioning bell in the world is the Mingun Bell cast in Burma in 1808 and which weighs 90 tons. 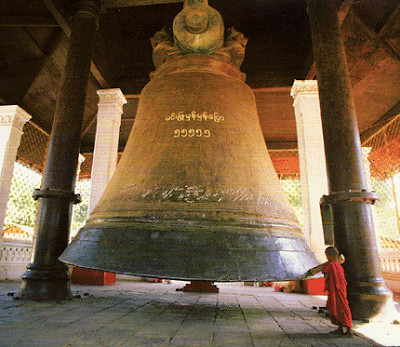 Another huge ‘Buddhist’ bell hangs in the Da Tzong Temple in Peking. Called the Great Yongle Bell it was caste in the early 1400s and weighs 46 tones. It also has the whole of a sutra (I think it’s the Saddharmpundarika Sutra) in raised characters, 230,000 altogether, on it’s outer surface. When I was in Peking in 1984 I bicycled around the city (you could in those days, there weren’t many cars) trying to find the temple. I had asked someone in my hotel to write the name of the temple on a piece of paper in Chinese so I could show it to people if I had trouble locating it. As happens I did have trouble finding the temple but I had even more trouble finding anyone who would give me directions. Everyone I approached to ask for help would either look the other way or wave their hand in my face, the usual Chinese way of saying ‘No!’ or ‘Go away!’ They wouldn’t even look at my piece of paper - so frightened were Chinese in those days of having any contact with what their government called ‘foreign friends’. After half a day of peddling around the city and being rebuffed or ignored I gave up and headed back to my hotel. Ten minutes later I found myself in front of the temple. But my delight was short-lived. Walking to the main entrance I saw a watchman sitting there - and I knew, I just knew. Anyone in China in a decision-making position was officious and obstructive and because the last flickering of Communist idealism still lingered even bribery wouldn’t move them. Friends tell me nowadays its the only thing that will move them. Good-old capatilism! I approached the watchman suitably obsequious and smiling and he gave me a sour look, barked ‘Jaow!’ and went back to reading his paper. Looking beyond him could see the great bell in the hall across the courtyard. I’d been so looking forward to seeing this interesting object and invested half a day in trying to find it, I decided on another strategy. I took some money out of my pocket and started going through the notes while giving the watchman a few sideways glances. No response. All during this time odd locals wandered in and out of the temple. So I never got to see the Great Yongle Bell. But here’s a picture of it. 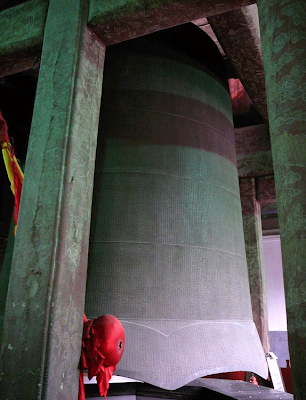 Posted by Shravasti Dhammika at 4:06 AM

Last time I travelled to Isaan, north-eastern Thailand, I noticed many wats (temples) that had bells made out of bomb shells. I guess those bombs where leftovers from the Vietnam war, as the USA had airfields in the area where they would conduct air raids in Laos, Cambodia and Vietnam. I thought that to be the best possible use of such ordnance. I had a few pictures of them, but I didn't put them on line. Maybe I will do it someday.