The Silence Of The Buddha

What is called ‘the silence of the Buddha’ has become almost proverbial. Numerous writers, academic and popular, have mentioned it, given their opinions about it and tried to plum the meaning behind it. According to Raimon Panikkar, “The ultimate reason for the Buddha’s silence seems to me to be rooted neither in the inherent limitation of the human subject, nor in the imperfection of our cognition, nor in the mysterious, recondite nature of reality. Instead, it seems to me that the ultimate reason for the silence of the Buddha resides precisely in the fact that this ultimate reality is not.” Contrary to what Panikkar thinks the Buddha affirmed the is-ness of ultimate reality (Nirvana) in his famous saying, “There is an Unborn, an Unbecome, an Unmade an Unconstructed. If there were not this Unborn, this Unbecome,…etc” (Ud.80) and elsewhere.
Edmond Holmes was certain that 2500 years of Buddhists scholarship got it all wrong but that he finally straightened it out. “…Buddha kept silence, when metaphysical questions were discussed, not because he had nothing to say about great matters, but because he had far too much, because he was overwhelmed by the 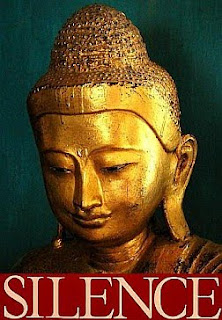 Hi
Where would I find “There is an Unborn, an Unbecome, an Unmade an Unconstructed. If there were not this Unborn, this Unbecome,…etc” (Ud.80) and elsewhere.
What is Ud.80 and could you point me to exactly the right place? Thanks for your time- Aaron

Dear Aaron,
Ud.80 refers to page 80 of the Pali Text Society’s edition of the Udana. I can’t be more exact than that. I dont have it right now but tomorrow I will give you the chapter and sutta number so you can find it in an English translation.

I love this post. And especially this phrase in it: they fill Buddha's silence with their own noise!!!:) In Sutta nipata Buddha again and again speaks about the uselessness of debates and the danger of sticking to set opinions.

Dear Shravasti Dhammika, there is an interesting story about Buddha's silence as an answer, but I am not sure if it is in Tipitaka or just one of Buddhist Apocrypha. One day three people came to Buddha with the same question - whether God exists. To an atheist Buddha said "Yes"! To a believer - "No"! And to an honest truth-seeker he didn't say a word but started meditating. Only that third visitor left him satisfied with his "silent" answer. If you know the source of the story could you give it, please!

Dear Aaron,
The quote you want is in the third sutta of the 8th chapter, the Pataligama Chapter, of the Udana. The two most easily available translations are P. Masefield’s published by the Pali Text Society and John D. Ireland’s published by the Buddhist Publication Society.
Dear Yuri,
The ‘sutta’ you are asking about is not from either the Pali Tipitaka or any Sanskrit sutras. Its ‘cute’ and ‘cleaver’ aspect suggests it is a very recent fabrication.

Thank you, dear Shravasti Dhammika, for clarifying the origin of the story. I also feel it is fabricated because Buddha in that case violated at least once his own precept of being truthful. But if we drop an atheist and a believer, his "answer" to that honest truth-seeker is quite meaningful! :)

Dear Yuri,
I agree with you. I notice that the internet is full of fake sayings of the Buddha, most of them putting the Buddha in a good light, a few of them quite meaningful. However, I think we have to clearly distinguish between sayings that are genuine in that they have come down from ancient times, and concocted and fake sayings. If not we will have the ‘Buddha’ saying anything people want him to say rather than what he wanted to say, and then the precious will get lost. This is why in my blog I always include the source of the quotes I give and I wish others would do the same.

Thanks for following up

Dear Shravasti Dhammika, the big problem with quotations is that "coming down from ancient times" is not any guarantee that the sayings are genuine. Take Mahayana sutras - they are not genuine though they can be very meaningful and useful. But even what seems to be the earliest document of Tipitaka put to writing (as indicated by its linguistic features) - Sutta nipata - it already contains some texts which raise doubts concerning their authenticity. With all this, Tipitaka really contains the essense of what Buddha taught - and especially important here are the first three sermons, Mahasatipatthana sutta and a few more. We may not correctly or fully understand them in the beginning, but the practice itself gradually develops in us a sort of "dhamma chakka" when we understand the Teaching deeper and deeper. And then it really becomes clearer which texts are useful and meaningful and which are needlessly fabricated. And the source of inspration is not that important - if it comes from a sutta in Tipitaka, or a Mahayana sutra, or from teachings of a Zen patriarch... If it comes straight from Buddha or from some of his enlightened followers.

So very glad that I found your Blog today! I will be checking back often.
Blessings,
David

I am not a Buddhist but I consider that Buddha's greatest contribution to human life is his experience of total emptiness - the ultimate nibbana which is also a rejection of any form of intellectual arrogance. Your comment on my article that I wrote some 40 years ago on the Silence of Buddha seemed to have troubled you. First of all the story I have mentioned in that article is not in the Tripithika but it is a Zen koan. Its also good to remember that no one ever tape-recorded Buddha's teachings; it was handed over by memory and committed to writing centuries after Lord Buddha's death. Teach whatever you wish with a sense of freedom and joy then you will correct others with the humility to learn everyday.
Prof. Chandrakanthan