Footprints In The Dust II

The Buddha was not, as is commonly supposed, primarily a forest dweller. Of the four monasteries he founded and now identified by archaeologists - Ghositarama, Jivakarama, Jetavana and Veluvana - the first is actually inside the walls of the city while the other three are within easy waking distance of their respective cities. When staying in these places the Buddha’s accommodation would have been reasonably comfortable but when he was on the road the situation was very different and he would have to sleep in or take shelter in whatever was available. We read of him sleeping in a potter’s shed on grass spread on the floor (M.I:502). On another occasion, he arrived in Kapilavatthu and finding no proper lodgings, spent the night in Bharandu’s hermitage sleeping on a mat on the ground (A.I:277). Often he must have simply slept in one of the many mango groves that to this day are still to be seen near most north Indian villages. Finding him out in the open one winter’s night Hattaka asked the Buddha if he was happy. He replied; ‘Yes my lad, I live happily. Of those who live happily in the world I am one’. Hattaka expressed surprise at this, pointing out that it was the dark half of the month, the time of frost, that the ground was trampled hard by the hoofs of the cattle, the carpet of leaves thin, the wind cold and that the Buddha’s robe appeared to be thin. The Buddha reaffirmed that he was nonetheless happy (A.I:136).
The Buddha must have also enjoyed the freedom his life of wandering gave him. For him ‘the household life is full of hindrances, a path of dust. Free as the wind is the life of one who renounces all worldly things’ (D,I:62). However, moving from place to place had very important practical reasons behind it too, in a world without the communications that we take for granted it allowed him to spread his teachings far and wide. He was also aware that some personal contact with him was important, especially for newly ordained monks and nuns, and that this may have been a factor in determining in which districts he visited and how often (S,III:90). During his wanderings he might visit a district, teach, make some disciples, even ordain a few monks or nuns and then perhaps not come again for many years. If a monk from such a district wished to see him again he could simply set off to wherever the Buddha was staying at the time. 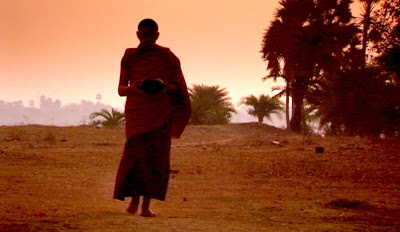 Sona Kutikanna was ordained by Mahakaccana and about a year later developed the desire to meet the man whose teachings he had committed himself to. He said to his preceptor; ‘I have not yet met the Lord face to face, I have only heard about what he is like. If you give me permission I will travel to see the Lord, the Noble One, the Enlightened Buddha’(Ud,58). For lay disciples with domestic obligations undertaking a long journey to see the Buddha would have been more difficult and so they may have had to wait, perhaps many years, before they got to see him again. The Thapataya Sutta gives us some idea of the excitement caused in an outlying district when its inhabitants heard that the Buddha might be on his way to see him and how the excitement increased as word of his gradual approach reached them (S,V:348-349). Elsewhere we read of people’s anxiousness for news about the Buddha and of what he had been teaching.
Once a monk who had spent the rainy season with the Buddha in Savatthi arrived in Kapilavatthu. When people heard where the monk had come from he found himself deluged with questions about the Buddha (S,V:450). On another occasion a group of brahmins from Kosala and Magadha who had arrived in Vesali, heard that the Buddha just happened to be in town and decided that the opportunity to meet him was one that was too good to miss. The Buddha had apparently given his attendant instructions that he was not to be disturbed while the brahmins were adamant that they would not leave until they got to see the famous teacher.
Seeing this impasse, the novice Siha asked the attendant to tell the Buddha that there were three people waiting to see him. The attendant said he would not do this but he wouldn’t object if Siha did. This was done, the Buddha asked Siha to put a mat outside his residence in the shade for him to sit on while he talked to the brahmins (D,I:151). But the Buddha couldn’t be everywhere at once and so monks and nuns would often take long journeys for the privilege of spending some time in his presence. For example once while he was residing in Catuma at least five hundred monks arrived to see him (M,I: 456).
However, with him moving around a lot, it was not always possible to know where he was at any one time. In the beautiful Parayana Vagga of the Sutta Nipata we read of the sixteen disciples of the ascetic Bavari setting out for northern India in the hope of meeting the Buddha. First they heard that he was at Savatthi and ‘wearing matted hair and dressed in deer skin’ they headed there. They went through Kosambi and Saketa and arrived in Savatthi only to find that he had left some time previously. They followed his route through Setavya, Kapilavatthu, Kusinara, Pava and Vesali finally catching up with him at the Pasanaka Shrine, (Barabar Hills north of Gaya) ‘and like a thirsty man going for cool water, like merchants going for profit, like a heat exhausted man going for shade, they quickly ascended the mountain’ (Sn.1014).
There were undoubtedly as many languages and dialects spoken in the Buddha’s India as there are today and this would have created special problems for him. Theravada tradition asserts that the Buddha spoke Pali although there is no mention in the Tripitaka of what language he spoke. Like merchants, diplomats and others whose professions meant frequent travel in different regions it is very likely that apart from his mother tongue, which would have been a dialect of Kosala, he was probably fluent in several other languages as well.
In the Aranavibhanga Sutta he says that insisting on using one’s own dialect in an area where another is spoken can only cause confusion and conflict. ‘It has been said, “One should not stake too much on the local language...” How does one do this? In different regions they might call the same thing a pati, a patta, a vittha, a serava, a dharopa, a pona, a hana or a pisila (these are all different words for a bowl or dish). So whatever they call it in one region, one uses that word thinking ,“It seems this person is referring to that object”, and one uses that word accordingly’ These are the words of someone familiar with a range of languages and dialects and who was very open and practical about language.
The Buddha was equally open about regional customs as well. Once when he found some monks spending too much time bathing and playing in the water he made a rule that they should only bathe once a month. Later some monks who had been staying in an outlying region where people found their infrequent bathing revolting (not surprisingly) reported this to the Buddha and he allowed them to bathe more often to accord with the customs of that region. Once again this is the kind of thing one would expect of the urbane well-travelled individual. Whatever the Buddha was he was not parochial and no doubt his travels made him even more urbane and open-minded.
For a map showing the Buddha’s last journey see http://www.ancient-buddhist-texts.net/Maps/MP-index.htm

Posted by Shravasti Dhammika at 12:27 AM

Thank you for your generosity in writing these posts about the Buddha's life.

They remind me of the Buddha's great generosity, which was not just a feeling but a steady course of action measured in distance and teachings.

Thanks again for your effort!

Thanks Bhante for this v nice write-up. If only we had a time machine and can go back in time to meet the Buddha in person!