Here are pictures of two panels from illustrating the famous Sasa Jataka (No.316). Four friends, a monkey, a jackal, an otter and rabbit (for reasons I cannot understand sasa is always translated as hare) vow that during the coming Uposatha they will be especially generous. Sakra, king of the gods, hears their resolution and to test them transforms himself into a wandering brahmin begging for alms. Each of the first three animals give him food but as the rabbit has nothing to offer other than grass, inedible to humans, he asks the Brahman to kindle a fire, then jumps into it, intending to provide the brahman with a roast dinner (note the fire in the second panel). Having passed the test Sakra makes the flames burn cool and the rabbit is saved. It’s a charming story but with slightly troubling implications. It is the only story in the Pali tradition of someone voluntary giving his life as an offering, as opposed to giving it to actually save the life or lives of others. Mahayana took this idea to its most illogical, not to say grotesque extreme, with stories of bodhisattvas giving their skin, limbs, blood and lives at the drop of a hat (or perhaps better, a turban), sometimes for the most trivial reasons and where some less dramatic alternative could easily have been thought of. 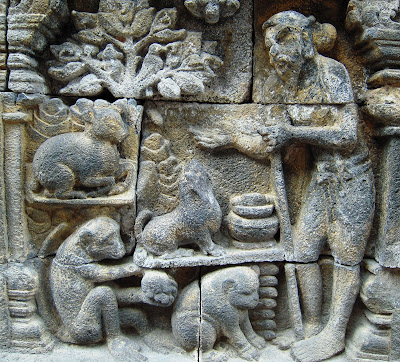 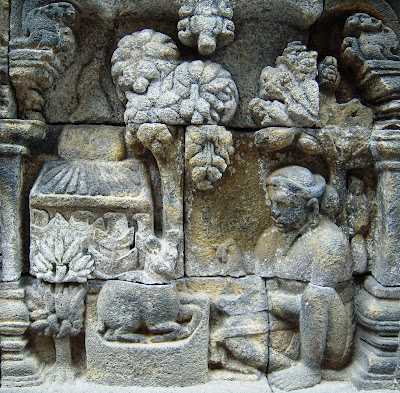