Today a very special and unusual Singaporean died, Teresa Hsu Chih. Apart from her major contributions to helping the poor and aged she was an inspiring example of kindness and compassion. At nearly every funeral nowadays the deceased is described as having “lived life to the full” but Teresa Hsu really did. The retired nurse was the founder of the non-profit charities—Heart to Heart Service and the Home for the Aged Sick, one of the first homes for the aged sick in Singapore. She had been a social worker in China and South America and a nurse in England, before coming to Singapore to start non-profit charities in 1961. She spent almost all her savings on feeding and housing the poor and the elderly, most of whom were younger than she was. In 2005, she received the Special Recognition Award from the Singaporean government in recognition of her contribution to the country. 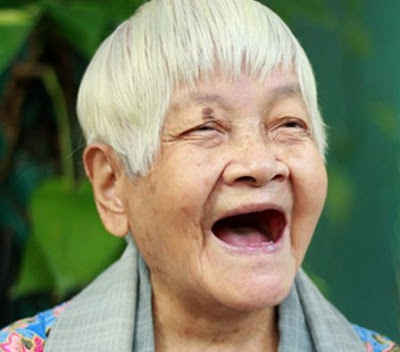 Like many Singaporeans of the previous generations Hsu came from a very depressed background. She was born in China in 1898. After the disappearance of her father her mother, who was illiterate, had to fend for her three girls and one son singlehandedly. At 16, the family moved to Penang. Malaya, where they worked as cleaners in a convent. The nuns allowed her to join the children in the classes and thus she managed to get an education. In time she moved back to China becoming a secretary and bookkeeper but then leaving her job to become a volunteer helping the injured during the Sino-Japanese War. Her experience during the war led her to London to train as a nurse. In her mid-50s, she returned to Penang to be with her mother where she assisted her brother in starting the Assunta Foundation for the Poor. She also played a key role in founding three homes for the elderly and two for young girls and neglected children in Ipoh
In 1961, she came to Singapore and opened the first home for the aged sick in Singapore in 1965. The society gradually built three blocks to house the increasing number of residents and Hsu remained the home’s matron until 1980, when she retires at 83. When asked where all her dedication and caring came from, Hsu replied: “I must have got it from my mother because she was totally dedicated to the job she chose to do and that was looking after the family. I think that trait was passed down to us. I’ve no family, so I look after everybody else. I choose to serve everybody else who comes to me—that is my job... The world is my home, all living beings are my family, selfless service is my religion”.
At a time when most people are winding down Hsu still had the energy and enthusiasm to continue. She set up the Heart to Heart Service with Sharana Yao, her co-social worker, a non-profit, non-government aided welfare service which provides food, clothes and monthly cash contributions to those in need. With the help of volunteers who drove her around, she brought necessities and cash to the homes of elderly women and destitute in their 80s and 90s on public assistance. The needy get on Heart-to-Heart’s list based on good faith by word of mouth
Remarkably Hsu was still active at 100. An advocate of healthy living, she often gave talks at schools, welfare homes, and hospitals in Singapore and overseas about health and service to the needy. When asked about the secret of her good health and longevity, she attributed it to a spartan lifestyle, vegetarianism and to her positive attitude towards life: “I prefer to laugh than to weep. Those people who cry to me, I always tell them it is better to laugh than to use tissue paper, as laughing is free but tissue paper still cost five cent. ‘Ha ha ha’ cost no cents.”
She would start her day at 4 am with calisthenics and an hour of yoga. She was also a regular meditator. At night, she would do yoga again, then read until midnight. She also taught yoga to the young and old at temples, associations, hospitals and schools. She ate sparely; her breakfast is a glass of water or milk. Lunch was often milk and salad, unless “people bring me food,” and it was milk or yogurt for dinner. She had a 2,000-volume private library which she called Prema. Teresa Hsu was Singapore’s oldest person at age 113 until she died on the 7th December. She asked that her cremation take place soon after her death and without ceremony and so her passing was only announced today. May she attain the peace and freedom of Nirvana.

To tell the truth, I had the thought of attending her funeral when I saw the headlines. But her body was cremated within a day and she asked for no formalities and rituals. She is truly a Bodhisattva in practice.

A very inspiring lady. Unbelievable to think she was still active at 100. I love her philosophy that it is better to laugh than cry because among other things you don't need a tissue. A very frugal woman too!

Here is an interview with Theresa: http://www.youtube.com/watch?v=VAv9_IefGxM

thank you for sharing with us, it is inspiring to hear of a life lived in joy of service. what a wondrous woman.

Thank you for this Bhante. Sis. Theresa Hsu is indeed a real inspiration. It may not be widely disseminated but Sis. Theresa is, to the best of my knowledge, a sterling ananda margii utterly devoted to her spiritual path and teacher. May she rest in the heart of taraka brahma.

Appears that Singapore has at least one Saint! Thanks for this Obituary...

A utterly selfless soul. She definitely will get to nibbana as she deserves but to me, she will always be remembered for her generosity and compassion. I was a little taken aback to learn that she did yoga, at her age, and that makes her really special.

Thank you for having been born, having been here and teaching us how to open our hearts generously to those in need. Best regards to your journey ahead.

She learned yoga only at age 68.