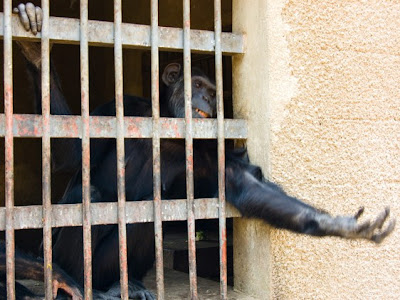 One day, for reasons I can’t remember, I decided to visit the New Delhi Zoo. When you know how the poor in India live it’s not surprising that the zoos are so dreadful. The animals in this zoo were confined in tiny cement cages or squalled compounds and they looked underfed, mangy and unhappy.When I got to the chimpanzees’ cage there was already a bulky man there with his little daughter. She had a bag of bread crusts and he was carrying a long green stick. The chimp had seen the crusts and expecting to get something to eat it had come up against the bars of its cage and was staring intently at the little girl. The man took a piece of bread from his daughter, held it out, and when the chimp reached for it he whipped its hand with the stick. The chimp screamed in pain and then jumped up and down with rage. The little girl squealed with delight and then her father lashed his stick back and forth across the bars driving the chimp to the rear of its cage. I was utterly horrified, not just the man’s viciousness, but also by the appalling example he was settingfor his daughter. In a frenzy of indignation I snatched the stick from him and told him what I thought of him. He stared open-mouthed at me for a moment and then began loudly shouting back at me. This ugly altercation continued for some time, a small crowd gathering to watch, until eventually we stomped away from each other exchanging is accusations was we did. All the way home I was in a state of enraged agitation, my mind racing with angry thoughts. Back at the temple I buttonholed the first monk I saw and recounted the whole incident to him. His failure to be as indignant as I was did nothing to sooth my rage. I went to my room, sat on my bed and tried to calm myself down. As my anger receded it began to dawn on me that all my previous months’ practice had completely failed. ‘Good god! What have I done! What must those people at the zoo thought when they saw me, a monk, red-faced, shouting and waving his arms around?’ I began to feel absolutely miserable. By the time Lamaji returned I was thoroughly depressed. He sensed that something was wrong, asked me what the problem was and I told him. I finished by saying; “I should have never opened my mouth.” “No Bhantji you did the right thing” he said. “But you did it in the wrong way. It’s hardly a surprise. You’re not an arahat or a bodhisattva. You still have defilements and you will have for a long time to come. But your growing, your changing and your sincere. I have seen it even in the short time you have been here. That man at the zoo probably still doesn’t realize the wrong he has done and he’s probably proud of shouting you down. You are sitting here feeling sorry for what you did. That means the Dhamma is already changing you. In the future you’ll continue making mistakes, you’ll give in to temptations and provocations. Don’t be too hard on yourself. As long as you keep your resolve, as long as you keep your faith in the Dhamma you’ll be okay.’ He got up, patting the top of my head as he did, and made us both a cup of tea. His words did not make me feel much better but in the next few daysI thought more about them and I knew he was right.
The Buddha said. “Just as the great ocean slopes away gradually, inclines gradually, without any abrupt precipices, even so this Dhamma and discipline is a gradual doing, a gradual training, a gradual practice.” (Ud.54). It is unrealistic to think that just because we do Metta Meditation and try to act with of kindness that we will never again lose our temper, get irritated or find ourselves making harsh judgments of others. We all commence our journey on the Eightfold Path carrying different baggage, we all proceed along it at a different pace, and we all pause to rest in different places. While maintaining your commitment to the spiritual life you should also be patient with yourself and not overestimate your progress. When anger overwhelms you, as it sometimes may, be aware of the work still needed but also remind yourself that you are slowly but surely moving forward.
Posted by Shravasti Dhammika at 8:41 PM

Very nice post sir, I had been reading your posts for quite sometime, they are really informative. Just wanted to appreciate your work. :)

Dear Bragi -- why such a hideous photo? Surely that's incompatible with your comments?

I know only too well how easy it is to get worked up with righteous anger but this story is a good reminder that it's not helpful.

May be it wasn't the perfect response, but lot better than silence or indifference which tend to be the most common response in developing countries.

I still think that man would think twice before hurting a helpless animal in public again.

If we remain silent, we're complicit. How could it be other than good that the girl heard her nasty father called up on his cruelty? You couldn't just walk away.

That is interesting. From the Mahayana viewpoint the main aspect of Bhante's behaviour was the protection of another living being (that we don't consider less worth than a human). Thus, a strong teaching is justified. The alternative, not getting involved or using friendly words, may statistically lead to much less "success", i.e. the father would probably repeat his beating the ape.

The monk instead is asking himself if he is following a guideline from the past, whereas we think of being totally absorbed in the present. There is no right or wrong in such instinctive behaviour. It is the judgement afterwards that causes the problem.

This is one of your best dhamma sharing.

I think that reactions like these are meant to teach us to remain mindful at all times. And, when we fail...(and we will) the lessons are almost immediate, and we feel unhappy with ourselves. There is also some satisfaction in knowing that we helped in ending the suffering of another, which helps us to forgive ourselves.

A good story with a sound instruction. I only want to add a bit of optimism. To live without irritation and anger is not an unsurmountable task. I am not an arahat but I do not remember the last time I was angry. Metta meditation is helpful but also one needs to develop mindfulness and detect the first stirrings of anger and as soon as they are detected they are nibbed in the bud. Another great thing is the right speech which also should be diligently practised. And then even strange avatars will not invite the word "hideous" :). Hpw many times in our past lives we were even worse than Hitler. Aversion is really hideous.

And one more thing. When we observe some evil-doings we could act out of anger or out of compassion. And that compassion could be extended not only to victims but also to evil-doers as they do not know how what they do will affect their lives kammically. Friendliness - Metta - should have no exclusions.

Thanks Yuri, good to have you back

Thank you Bhante, this is a really encouraging post. It is good to be reminded that nothing is instant yet if we keep on striving, there will be result.
I still think it is good to take action when we see something wrong but we have to be wise in the method, and be careful not to get carried off with emotion and end up feeding our defilements.
In your story, at least that little girl was given a different perspective rather than the bad example her father set.

Thank you Bhante. That was very encouraging, humbling and inspiring. Often in our practice we either make the mistake of romanticisizing the results of our practice and even deceiving ourselves of it or might tend to get discouraged and disillusioned. I loved your post, for it was such an apt reminder to balance ourselves and keep moving forward.