It's Not About Winning Or Loosing

Sport (kili) or (lila) is, in the broadest sense, physical exertion for the purpose of recreation, health or competition. Like all peoples, the ancient Indians played and enjoyed a wide variety of sports. Garden sports (uyyanakila) consisted of games like hide-and-seek, tag and racing, while water sports (udakakila)  involved swimming and diving. Stick fighting, boxing, wrestling, callisthenics and other sports and games were probably played in stadiums (kelamandala, Ja.VI,333). Several other games were played with a ball although we have little information about how these activities were structured. One game we do know something about was played with a string attached to a ball and involved throwing the ball, jerking back the string and trying to catch the ball in the hand (Ja.V,196). The Buddha had nothing to say about sports other than that monks and nuns should not watch them (D.I,7). Nonetheless, the physical and psychological aspects of sports could have relevance to the Buddhist.
The Buddha said: `Good health is the highest gain' (Dhp.204), and he encouraged monks and nuns to do exercise as a way of promoting vigour and health (Vin.II,119). As far as the mind is concerned, sport can help to develop positive states like team spirit, friendship, alertness and even a degree of detachment (gracefully accepting defeat). Sadly, nearly all sports today have become excessively competitive and few things bring out the worst in people as much as competition does. Cheating, violence by both spectators and players, personal animosities, doping, match fixing and being a bad loser have all become the norm in professional sports. Some encounters are even promoted as `grudge matches.' The old value of `it is not whether you win or lose but how you play the game' has been unceremoniously shoved aside by large egos and even larger salaries.
A good example of a sport that requires great skill, is healthy for the body and restful for the mind, conducive to friendship and mutual appreciation amongst players and is enjoyable for spectators, is called chin lon in Burma, takraw in Thailand and sepak takraw in Indonesia. The idea of this sport is to keep a cane ball in the air by knocking it only with the heels, knees, elbows and shoulders. There is no competition as such; one player keeps the ball for a while, demonstrating his skill and grace, before letting it go to another player. No one wins or loses and everyone enjoys themselves. Sometimes chin lon is played to the accompaniment of music. It is common for young men to assemble wherever there is space, often in a temple courtyard, and whenever they have free time and just play this game. 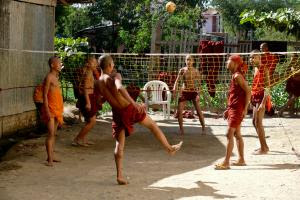 Posted by Shravasti Dhammika at 5:57 PM

It is an interesting topic,Bhante.
But,in some Mahayana tradition,monks are allowed to practice martial arts and compete each other.Is it acceptable for Buddhists from your point of view?
Regards

Dear Phyo, martial arts were practiced by small numbers of Chinese monks during certain periods in history. The reason for this was that certain monasteries had great wealth and extensive estates and these had to be protected. Sometimes monasteries sided with one or another side during political upheavals and their monks acted as mercenaries. All this would certainly be completely at odds with the Dhamma and the Vinaya. However, today certain martial arts may well be good for both the body and the mind and help to develop self-discipline and vigour.