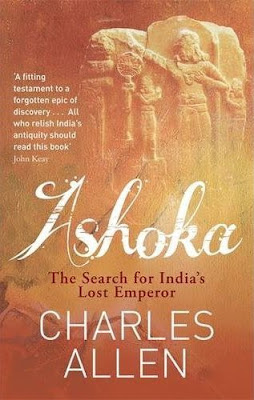 It is as if in another three or four hundred years from now the Americans had forgotten about George Washington, or the British no longer knew the name Winston Churchill. Asoka Mayura was not only ’s greatest  monarch he also ranks in the estimation of many as the greatest  statesman of all time. And yet until 150 years ago his name and his achievements were completely unknown in . And this despite his edicts being scattered throughout the  sub-continent. Ashoka; The Search for the Lost Emperor by Charles Allen is not so much about the man himself but rather about how he became lost and how he was ‘re-discovered’. And it is a fascinating, even thrilling story. Over the last 20 years Allen has written widely about the British in but as his  interest in Buddhism has grown  he has been able to combine the two interests, producing such books as  A Mountain in Tibet,  The Buddha and the Sahibs and The Buddha and Dr. Fuhrer.
There is little in Allen’s most recent offering that is new but most of it is tucked away in obscure scholarly journals and half-forgotten monographs not available to the average reader. He  has diligently dug out all the facts  and presented them to us in an interesting and readable way. The text is made more interesting by old drawings, lithographs and photos. It is fashionable nowadays, almost de rigueur, to denigrate everything the British did in and cast aspersions even on the good they did. But as Allen shows, there were many who came to love , its civilization and its achievements; Sir William Jones, Colin Mackenzie, Alexander Cunningham   and   the great James Prinsep who laboured to decipher Asoka’s inscriptions and ultimately succeeded. Just how Princep finally cracked the code is a great story but he could never have done it had not officers in the field sent him the coins they found and hand copies of inscriptions they came across while doing their duties. As a result Princep  and the others gave to ’s intellectuals, and eventually to its larger public the first realistic picture of their past, a past  they could be justly proud of and which eventually led to the arising of national  self-confidence and then calls for independence. And when independence came the Indians chose to put Asoka’s dharmacarka on their national flag and make his Sarnath lion capital their national emblem.
The only problem I have with Ashoka is that Allen seems to overemphasize the role of Brahman/Hindu hostility to Buddhism in the disappearance of Asoka from Indian consciousness for more than a thousand years. The sculpture of the lion subduing the elephant on pictured on page xiv is not a motif for Brahmanism’s victory over Buddhism.  However I am half way through Giovanni Verardi’s difficult-to-get and controversial Hardships and Downfall of Buddhism in which, when I have finished it, might persuade me to change my opinion on this matter. But this is a small matter Ashoka; The Search for India’s Lost Emperor is a thoughly good read and should interest everyone interested in Buddhism and its history.
Posted by Shravasti Dhammika at 4:35 PM

So glad you have blogged this great read.

We can't agree with you that that Allen "overemphasized the role of Brahman/Hindu hostility to Buddhism in the disappearance of Asoka from Indian consciousness for more than a thousand years."

Having traveled and worked with educated and articulate Dalit monks, we don't think that orthodox Hindu hostility to Buddhism could be exaggerated.

There is an interesting story about the Indian flag. Shortly before India gained its independence in August, 1947, the Constituent Assembly was formed, with prominent Hindu and Muslim members, and the father of the Indian Constitution, the untouchable, Dr. Bhimrao Ambedkar. They proposed a flag that would be acceptable to all parties and communities, without communal undertones. The spinning wheel that Gandhi had favored was replaced by the Chakra from Ashoka’s Lion Capital. Gandhi apparently was less than pleased by the change, but had little choice but to accept it.

Again thanks for highlighting this important history.

Is it Asoka on the books' cover page?Could you tell me about the two people,the pillar & the extended hand of the middle person?Are there any other depictions of Asoka?

Dear Blogger, the sculpture is from Amaravati in South India and depicts a ‘universal monarch, cakkavatti, the ideal Buddhist statesman. He is in the middle with his arm extended and surrounding him are his minister, wife, steed and jewel, some of the seven possessions of a cakkavatti, the others have been broken off. A wheel of justice (dhammacakka) appears in the sky when such a monarch rules, that is seen on the left of central figure. It is likely that Asoka saw himself as such a cakkavatti. Details about the cakkavatti can be found in the Cakkavattisihanada Sutta of the Digha Nikaya. No image of Asoka is known from ancient India. A better picture of the sculpture you ask about is found on page 89 of Allen’s book.

Some scholars say that Ashoka is depicted in a Bharhut carving (now in the Indian Museum) which shows a rather squat homely monarch on an elephant and holding a reliquary. It isn't a generic king, so it might really be what he looked like?

Googling, I came across a very interesting link,a labelled image of Asoka was found at Kanaganahalli MahaStupa.

Dear Blogger, I have read the preliminary report of the most recent findings from Kanaganahalli. There is no mention of any inscription accompanying the sculpture of this royal figure and the surrounding females. Thus the claim that it is supposed to be King Asoka is, at best, highly speculative. Such wild and unsubstantiated claims often come out of India.

Are there any signs of the economic theory that the peoples in ancient India held? Are there words indicating economical thinking in the Tipitaka? For example: capital, investment, profit, accounting, inflation, interest, lending, etc...?

Dear Yaksha, please go to www.buddhisma2z.com and look up Entrepreneurial Skills, Interest, Livelihood, Money and Wealth. You might try to get a copy of Kumar and Desai’s comprehensive The Cambridge Economic History of India: Volume I (1983) you might have a look at S. K. Das’ somewhat dated but still useful Economic History of Ancient India which you can find at in PDF on the internet.

Thanks for the excellent information in B. A to Z! I am somewhat surprised at the shrewdness of the first story. I'd further like to know if they had an other form of saving than "burying a treasure" in Buddha's time? Or an other form of pension than one's children?