A Matter Of Sacrifice

A Hindu temple in  has agreed to cancel this  year’s    ritual sacrifice   after a series of protests by Buddhist monks and animal rights activists. Hindu devotees were to sacrifice around 300 goats and nearly 1000 chickens at the popular Sri Badrakali Amman Kovil temple in Munneswar, north of , on Saturday. Chief priest Muththu Sivapada Sundaram announced that the annual event would not take place this year, by request of President Rajapaksa. He asked them  to refrain while the sacred Kapilavasthu relics of Lord Buddha are on display in . They will be shown until September 12 at various locations. Over 1,000 monks and activists demonstrated in front of the temple last week, while some animal lovers went to court to seek a permanent ban on the practice. After a postponement, the Court of Appeal is due to hear 14 petitions tomorrow. “We cannot stop this ritual, as Hindu devotees bring animals to please their goddess Kali, but we respect the president’s request,” the chief priest said.  “This is a collective decision taken by our board of priests, even though issued an order in favor of us.” 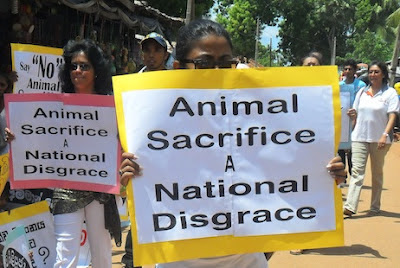 The issue of animal sacrifice generates controversy and heated debate on a regular basis. “Hinduism is a peaceful religion, it does not support such a cruel act. God cannot be satisfied by the blood of innocent animals,” said Venerable Passaramulle Dayavansa, a prominent Buddhist monk. “It’s time to end killings in the name of religion.” Lalani Perera, a lawyer and advocate for the animal rights activists, said: “ does not have a strict law but these slaughters breach the provisions of the Cruelty to Animals’ Law and the Butchers Ordinance. We have filed a case with magistrates.” Government minister Mervyn Silva appeared to side with the protesters at a press conference, when he said that the ritual is not mandated in any religious scripture. “Being in a Buddhist country, we should not engage in these types of criminal acts,” he said. But many practising Hindus are not happy about the ban. “This is a vow to the gods,” said one of them, Subramaniyam Saraswathee. “Many parents bring their children to the temple to receive blessings,” she said. “This is a serious issue.” From UCANews.com
Posted by Shravasti Dhammika at 7:17 PM

1) The background is that the President does not want the slaughter because currently Buddhist relics are displayed until the 12th of September.
2) What do those Buddhist monks say when meat is donated for their meals?
3) In some of those sacrifice ceremonies the animals are eaten afterwards. Not much different from killing them for meals (if for lays or monks).
4) The Hindus on the other hand do not kill the cow, contrary to Buddhists.

In total, this is once more just a war of religions that doesn't make much sense.

Well, I know, there are exceptions for the killing of cows ...

I have some questions (not related to this topic).
The MahaParinibbana Sutta
mentions that The Bhagava was paid homage by singing & dancing.What was the reason ?Why instead of mourning?
Secondly,though singing(Samagana/Bhakti Path) was and still remains the main way to celebrate glories of Indian deities, in contrast no one exalts The Bhagava.Theravadins do chant Suttas but the exhilaration and rejoicing observed in Indians seems to be absent.Indians begin their day with suprabhata(for awakening a deity and each deity has his/her own Wake-up call) ,do abhisheka(ceremonial bath)& end the day with beautiful lullabies. Such things are a bit ritualistic but Buddhism too isn’t devoid of them and some basic expressions of faith are from The Bhagavas’ lifetime , also Paramopasaka Harshavardhana is said to have composed a Buddha Suprabhata Stotra [is it extant?].It is unusual that none of these activities are present in contemporary Buddhism,do you think lay Buddhists are leaning towards the other ‘Two Jewels’?


Dooyen is with reason : to-day is the last day of this marvelous exposure of Buddha Relics : one day it will be transmited by tv to others countries making a global union of faith with this concrete substratum : that Buddha leave, conduct, oriented the world to Peace, sacred peace. The food of animals will be eaten to-morrow. Silva and Perera are very common names here at South America.