Death Of A King 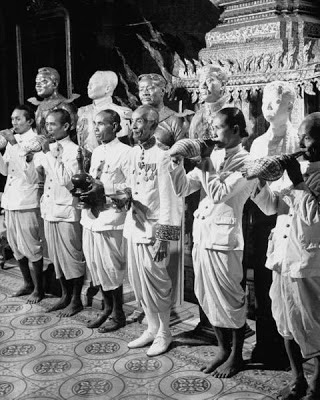 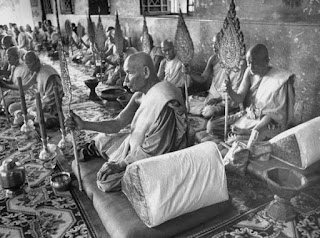 Norodom Sihanouk, former king of Cambodia died today (15th Oct). Often described as ‘mercurial’ he would also have to be called a survivor, having emerged in one piece from his country’s turbulent history, abdicating twice, and living long enough to be almost the last of Asia’s post-independent leaders. Here are some pictures of him taken by Howard Sochurek in the early 50s. 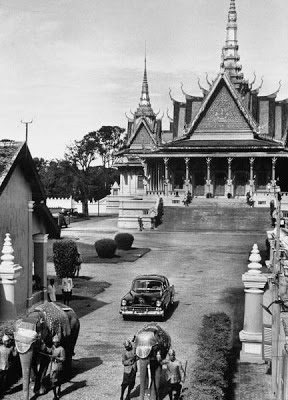 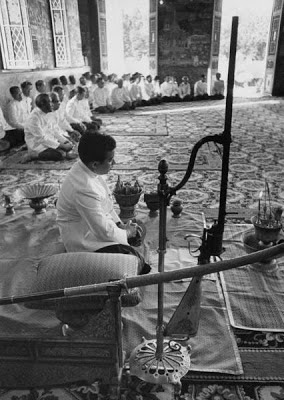 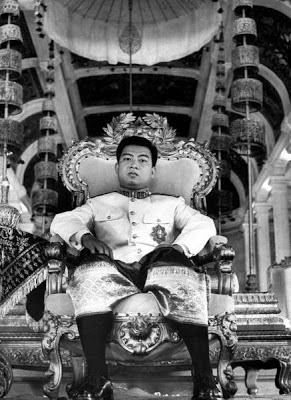 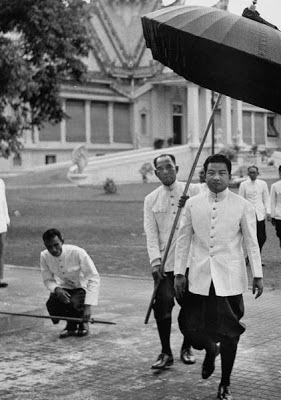 King Sihanouk was also a film-maker, and extracts from his films can be seen here: http://www.cultureunplugged.com/play/5531/Norodom-Sihanouk--King-and-Film-maker

The end of an era, and what a time it was.

Is it just nostalgia? Is it the black-and-white photography? Or was it really a simpler, less vicious time?

Let's not forget that he was a man greedy for power and therefore once even supported the Khmer Rouge, to be reinstated as head of state (who later imposed the death sentence on him which was not implemented because former Chinese KP party leader Chou En-lai intervened). A rather good example of an opportunist.

Can't see how Sihanouk could be criticized as greedy for power -- he was born to the throne and ended up having more roles than most anyone else alive. He certainly was a survivor and tried to steer a middle course through extremely treacherous waters!

He was, on his mother’s side, the grandson of King Monivong (reigned 1927–41), and succeeded his grandfather at age 18. At the time Cambodia was a French protectorate, and Sihanouk had little power.

Toward the end of World War II, the occupying Japanese encouraged the young king to declare Cambodia’s independence from France.

When French military forces moved back into the region, Sihanouk decided to wait until France’s retreat from Indochina, which occurred in 1954.

He established the Sangkum Reastr Niyum (“People’s Socialist Community”) in January 1955, won a referendum in February approving its program, and on March 2 abdicated in favour of his father, Norodom Suramarit, becoming prime minister, foreign minister, and subsequently permanent representative to the United Nations.

His father died five years later, in 1960, and Sihanouk became
chief of state.

Sihanouk tried to steer a neutralist course in his foreign policy. He got the North Vietnamese to pledge to respect Cambodia’s frontiers, and in return allowed the Vietnamese communists to operate covertly from bases inside eastern Cambodia.

Sihanouk rejected U.S. aid and assistance, and depended on his immense popularity with the Cambodian people to keep radicals of both the right and the left under control.

Under Sihanouk’s benign rule, Cambodia experienced 15 years of fragile peace and mild prosperity while much of Southeast Asia was in a state of upheaval.

Richard Nixon carried out tremendous secret bombings of Vietnamese routes and strongholds in Cambodia, which strengthened the extremists in the rural areas.

Sihanouk’s maintenance of Cambodian neutrality in the Vietnam War ended in 1970 when he was ousted in a U.S.orchestraited coup led by General Lon Nol.

Following the Khmer Rouge takeover of Cambodia in 1975, Sihanouk returned home, only to be put under house arrest. Under dictator Pol Pot, a four-year reign of terror ensued during which more than one million Cambodians were killed.

Sihanouk was released in January 1979 because the Khmer Rouge regime was falling to Vietnamese military forces and needed an advocate in the United Nations.

After denouncing the Vietnamese invasion, he dissociated himself from the Khmer Rouge.

From residences in China and North Korea, Sihanouk became president of an uneasy coalition government-in-exile made up of the three principal anti-Vietnamese Khmer forces—the Khmer Rouge, the anticommunist Khmer People’s National Liberation Front, and Sihanouk’s neutralist party. He retained his role as resistance leader until 1991, when he was elected president of Cambodia’s Supreme National Council.

In September 1993, following UN-sponsored elections the previous May, Cambodia’s National Assembly voted to restore the monarchy, and Sihanouk once again became king

That is something different, as people are used in "modern" countries. It's a whole country that grieves.
It might sound silly, but there are even detail orders to every citicent, what to make, how to honore... For this week after his death, there is no kind of amusing allowed.
I an way, it clams down a whole nation for some days. There is nobody who is not touched. People form all over the country, the smalles forest villages, school classes, from everywhere travel to the palace to say goodbye.
A (former) king is regarded like a father, citicent are used to be called "Grandchildren" and the King father him self is called like a monk "lord of compassion"

Such kind of respect and honore is long forgotten in "modern" world but still this kind of gratitude is (was) alive.

It would be even shameful to talk about misdeeds or worse things in his past in this days. It's a very buddhist attitude to put much effort in sreading the good and excuse and understand that others things come their way.

Thanks Ven. for Shravasti Dhammika for taking part on apacayana and for its spread.


PHNOM PENH, Cambodia—Factory managers expressed regret and dismissed a Chinese supervisor on Monday after angry Cambodian garment factory workers demanded that she be punished for tearing up a poster of their late former king.

More than 1,000 workers marched to the Royal Palace after the head of the sewing section of two related factories ripped in half a portrait of former King Norodom Sihanouk she had seized from a worker before the morning shift began. She accused the employees of shirking work.

Sihanouk, who led Cambodia through a half-century of peace and war, died Oct. 15 in Beijing. His body was returned last Wednesday to Cambodia, where a week of official mourning was declared.

Factory manager Khuch Osaphea said the management of the Chinese-owned factories expressed regret over the incident and dismissed the Chinese supervisor and handed her over to authorities for legal action.

Garment exports are Cambodia’s major foreign exchange earner, and as many as 400,000 people work in hundreds of factories in the Phnom Penh area.

The government tries to strike a balance between workers’ demands for higher pay and employers’ desires to keep wages low. Many factories are subcontractors for large Western brands. The factories involved in Monday’s incident produce trousers for US and European markets.

Phnom Penh city police chief Lt-Gen Chuon Sovann said the supervisor was arrested on charges of insulting the king and inciting public disorder, and would be brought to court on Tuesday where she could be formally charged by prosecutors.

He said that if police had not arrived on time, the woman would have been in danger of being physically attacked by the workers, “but after receiving assurances from the police that she would face justice for what she did, they were fully understanding.”

One worker, So Sareth, said she did not understand why China’s government had honored Sihanouk and yet the Chinese supervisor could act so disrespectfully.

“Today this woman dares to tear up the picture of our king, next time she will commit a crime against us workers if she is not punished now,” said So Sareth.

The workers traveled by foot and truck to the palace, carrying another portrait of Sihanouk. When they arrived, they all knelt before a giant portrait of the late king on the palace wall, to which they expressed regret for his portrait being destroyed.

A food vendor who sells meals to the workers in front of the factories said he also stopped business on Monday to join the protest.

“She had insulted our king. Her act cannot be tolerated,” Sokun Theara said.