The Jataka is a book in the Kuddhaka Nikaya, the fifth  part of the Sutta Pitaka which in turn is one of the three divisions of the Pali Tipitaka, the earliest record of the Buddha’s teachings. The date of the Jataka is very problematic but some of the stories are depicted on the railings of the Bharhut stupa (1st/2 st centuries BCE) and the gateway of the Sanchi stupa (1st century BCE) so they must earlier than this. Some of the stories certinally predate the Buddha and may be very old, others are distinctly Buddhist, but in their present form they all probably date from the time of the Buddha to perhaps the Asokan age. Throughout the centuries the Jatakas were Buddhism for the majority of people. Other than the life story of the Buddha himself, the Jatakas gave the overwhelming percentage of Buddhists their ideas of Dhamma. Their influence on moulding the character of people in Buddhist lands, on art, literature, theatre, poetry, etc, cannot be overestimated. Despite this, Western Buddhists are yet to discover the value of the Jatakas. They are usually dismissed as “good for kids.”  Hopefully this attitude will change. 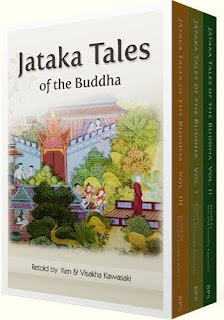 There still is only one complete English translation of the Jatakas, that done by E. B. Cowell, Robert Chalmers, W. Rouse, H. T. Francis and R. A. Neil under the editorship of Cowell and published in 1895 in six large volumes. As a pioneering work it  is a remarkable achievement.   So-called ‘orientialism’ is a derogatory term nowadays and its assumptions  belittle  the dedication, skill, patience and  scholarship of people such as Cowell and his team, and many others scholars as well, who laboured to make the wisdom of the East  accessible to the West.  The Pali Text Society now publishes  Cowell’s Jatakas in three large volumes. 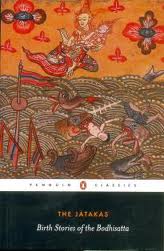 There are plenty of re-tellings of selected Jatakas but few actual translations. The best to come out of late is Sarah Shaw’s Birth Stories of the Bodhisatta published by Penguin, which contains 20 stories. The biggest re-telling of Jatakas, 217 stories altogether, is K & V Kawasaki’s three volume Jataka Tales of the Buddha available from http://www.brelief.org/jataka/Books/Jataka-bcc.html  Undoubtedly the most beautifully retelling is  Ellen C. Babbett’s Jataka Tales and More Jataka Tales, each a little literary masterpiece. The first has 18 and the second 28 stories in it. Incidentally, Babbitt’s life was almost a Jataka story in itself. See if you can find a biography of her.
And one more thing. Two excellent books on the origins, history, structure and influence of the Jatakas and of their place in Indian literature are Anomi Appleton’s Jataka Stories in Theravada Buddhism and W, Rhys Davids’ Buddhist Birth Stories. Happy reading!
Posted by Shravasti Dhammika at 10:01 PM

I had and loved my Jataka comic books as a child. So I was very pleased to find out that Amar Chitra katha is still publishing the same books, same format and the price is not extortionate.

Siddhārtha Gautama was a spiritual teacher who founded Buddhism. In most Buddhist traditions, he is regarded as the Supreme Buddha of our age, "Buddha" meaning "awakened one" or "the enlightened one". The time of his birth and death are uncertain: most early 20th-century historians dated his lifetime as c. 563 BCE to 483 BCE; more recently, however, at a specialist symposium on this question, the majority of those scholars who presented definite opinions gave dates within 20 years either side of 400 BCE for the Buddha's death, with others supporting earlier or later dates.