The Year Of The Snake 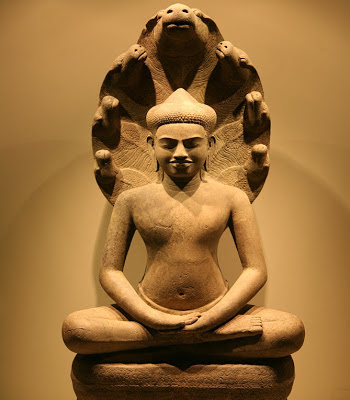 Today is the first day of the Year of the Snake in the 12 year cycle of the Chinese calendar. In myth, religion and symbolism snakes are almost universally regarded as positive. Ophion was a sort of Greek creator or overseer of the world. Mercury and Hermes the Roman and Greek messengers of the gods carried a staff with two intertwined snakes on it. The rod of Asclepius, the Greek god of medicine and healing, had a snake twisted up it. Quetzalcoatl, the Feathered Serpent was the Aztec creator, and the Egyptian pharaohs always had a snake on the front of their crowns, although I don’t know why. One of the few malign snake deities was the Egyptian Apep, god of chaos. It was probably he who caused the ancient Hebrews to  regard the snake as evil, and hence the Bible creation myth of Adam and Eve being tempted by Satan in the form of a snake.
In Buddhism the snake occasionally has a negative role as when it represents hatred in the centre of the Wheel of Life, the pig representing delusion and the cock greed, the three always depicted biting the other. But as with most traditions  Buddhism more often gives it a positive associations. The most significant of these, as mentioned in the Vinaya, is the incident that took place during the Buddha’s third week after his enlightenment. A violent rain storm broke out and the naga (snake or dragon) Mucalinda coiled himself around the Buddha seven times and opened his cobra-like head over him to shelter him (Vin.I,3).
Some say it points to the Buddha’s seven chakras being opened, chakra meaning ‘coiled energy.’ Ingenious but unconvincing. The numerous tantric texts give different numbers of chakras, from one to over 30. And charka does not mean ‘coiled energy’, it just means circle or centre. Another explanation, perhaps more convincing, is that the story was meant to give a role, albeit a minor one,  to the various snake spirits and deities worshipped in Magadha at the time, to sideline them as mere minders or bodyguards to the guy who really mattered – the Buddha.
Anyway Xin Nian Kuai Le to all my Chinese readers.
Posted by Shravasti Dhammika at 11:56 PM

The mind easily confused by stories !! Say it as it is, don't put positive or negative spins on it. Few are those who see things as they are :))) cheers