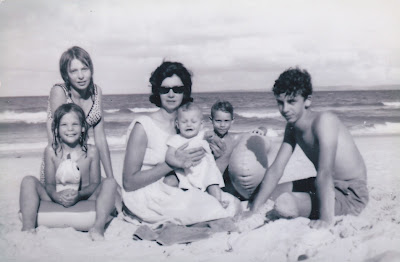 When a piece suddenly goes missing from the quilt of your relationships you tend to give some thought to the person who used to be there.  After mum’s death three days ago I was looking through some old photos. This one brought back memories of 1966 to be exact, and all the experiences and images from that time, almost none of which have bothered to amble into my mind for a good 30 years. This photo was taken at the beginning of what was to become nearly a decade of emotional turmoil. What with the onset of puberty, increasing difficulties in my parent’s marriage, being bullied at school and later, very serious bouts of depression, I was not a happy youth. Some sympathy from my parents could have been a real comfort. But mum’s preoccupied with my baby brother (that’s him on her knee) and the war of attrition she was waging against my father (he’s taking the picture) meant that she had little time for me. Dad never has any time for me even  when things were okay. Aware that he had made several decisions that had upset the family’s previous middle-class comfort and financial security his hair-trigger temper had become worse than ever. I didn’t want his sympathy, I just tried to keep out of his way as much as possible. Despite all the disruption they were enduring neither of my parents ever failed to provide for our material needs. Dad always brought home the bacon, never spending any on himself, and mum performed her household duties with all the diligence and skill she had always done. That was one aspect of being a good parent that they both excelled at and I am grateful to both of them for it.
My mum also passed onto me a love of books and reading, a concern for animals, a   fascination with history and something I sometimes wish I had less of but which been very helpful to me nonetheless, a sceptical turn of mind.
However, looking back I would have to say that by the time I left home I was a bit of an emotional mess. I had what would now be called “low self-esteem”; then we just called it being a misery guts. I also suffered from periods of dark depression which I inadvertently made worse by listening to Tchaikovsky’s Pathetique from my small record collection. To this day I when they play this  symphony on the radio I have to turn it off. Then one day I found a copy of The Mind Unshaken, John Walters’ account of Buddhism and why he became a Buddhist. I was riveted, especially by the Buddha’s idea that while dukkha was an integral part of life it can be overcome. This seemed to arouse a determination to pull myself out of the bog I found myself in. Over the next decade or so I absorbed the Dhamma and as I did I gradually “untangled the tangle” and straightened myself out. I can say with honesty that my last 30 years have been generally happy, satisfying and fulfilling and I owe that entirely to the Dhamma and my own efforts. I am convinced that one need not be held back by difficult or unpromising beginnings and that the recourses needed for this task are available in the Dhamma.
Posted by Shravasti Dhammika at 12:29 AM

Sorry to hear about your mother's passing away. Thanks for sharing this very candid post.

Very touching write up. Lucky that you found the Dhamma, knowing it, practice it and share it generously with others. Thank you for sharing the Dhamma with us.

Thanks for your candid reflections and sharing, Bhante. Your dedication to the Dhamma has helped me and many other students of yours, I'm sure. By the way, is that Caloundra beach or somewhere along the Sunshine Coast in the photo background?

I wish you well and peaceful

I had a similar background as you and thousands of children, an alcoholic and probably manic depressive father.
It came from his how he was treated as boy. It left me with a tense and anxious childhood and thus formed who I am and I was going to write about this. But more important is expressing many times to my mother that the best parts of me came from her...as she is still alive. This lead me to the importance of the Bhikkhuni line seeing that women play with a more grounded view of the world.

A wonderful, candid view of your parents, childhood and teenage years.

Great photgraph, say, whose the nerdy looking one on the far right Ha ha! Even though you are going through a bereavement(and all that it means for you) and as many other respondants have done, is to share their experiences about this issue. I may be speaking out of turn here but I wonder if your father was a war veteran. Mine was, and he returned to Australia a nervous wreck. Fairly fragile emotionally, short tempered and so on. Despite all his problems he was able to make a good living and was generous and sober. My Mother was also pretty decent too but did have short comings. I had some grudges against them until I was about age thirty and then I realised that my parents were in fact, still growing up just like me. I was able to see them as people evolving and maturing the same as me and every body else, not as some sort of monolithic parents. I was greatly releived to come to this understanding and I realised that I loved them both especially for how they had supported my brother and myself through thick and thin. I resolved to tell them both the next time I visited them. Within a very short time they both passed away in short succession. Funny old world ain't it! Sorry Bhante I am in no way trying to compare your family background with mine there are some very significant differences indeed but it may be helpful in some way...I hope.

Thank you for the inspiring post, Bhante. Many happy years ahead.

Sorry to hear about your mother. I took care of my parents for fifteen years. We have all sorts of special feelings and views about our parents when we are young, mostly because we are young and basically can't comprehend anything but ourselves and our parents. In order to care for them I had to drop the many notions I had about them and see them as people, not parents. All the special feelings dropped away and the gift they gave me was the lesson that there are no special people, anywhere, and there never has been. Despite the fantastic constructions we make in our minds and the resultant judging and discrimination about this and that we're all in the same boat, as they say, and will all suffer the same fate and the same potential indignities. I let go of my self in stages too, as I saw them reduced in stature and importance. I helped them and they helped me, as people, not parents.

Just visited here after a long spell. My deepest condolence on your mother's passing. How I wish I could go this way in time to come.

We all have our own stories to tell.