The other day I put metta into a  Google  Image search hoping to find a picture illustrating the concept or perhaps a beautiful picture with some words   from the  Metta  Sutta on it. All the pictures that came up were of a black American basketball player. Intrigued and a little confused I did a bit more searching and discovered that this high-profile sportsman recently changed his name to Metta World Peace, Metta being his first name and World Peace being his surname. The Wikipedia entry on MWP quotes him as saying: “Changing my name was meant to inspire and bring youth together all around the world” and his publicist  explained  that he chose Metta as his first name because it is a traditional Buddhist word  that means loving kindness and friendliness towards all”. It is a laudable sentiment and it’s nice to know that something of Buddhism is getting wider coverage with the general public.  The letdown was not long in coming. 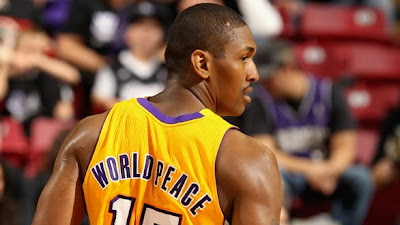 It seems that MWP was arrested for domestic violence four years into his marriage and his wife filed for divorce two years later. He has been involved in violence on an off the court several times as well and in a recent interview he stated that he regretted changing his name.

High profile sports stars behaving badly is nothing new but this sportsman’s  name change thing raises an interesting point, to me at least. The word  love, whether used in a romantic or a religious sense, is thrown around often and very liberally. The quality itself is quickly and ardently professed, everyone gets all warm and when they use it or hear it being used, it is lauded and put forward as the solution to many, sometimes to all, human problems. But let’s face it, love of any type, especially metta,   is a rather rare quality. Getting all tearful and chocked up while saying “May all beings be well and happy” is one thing. Genuinely trying to be forgiving, patient, kindly and generous, especially when it is hardest to do so, is another.  This is not to say that we can’t have metta but just that it takes more than talking about it or giving yourself that name.
Posted by Shravasti Dhammika at 6:03 AM

Excellent and sobering thoughts, Bhante. I remember a Dhamma talk in which a monk said that he used to sit alone and generate loving kindness towards the whole world until tears of joy and compassion ran down his face. Five minutes later, while queuing for food, he found himself harbouring thoughts of hatred towards fellow monks.
I guess we just have to make what progress we can, and not deceive ourselves about the results of our practice.

Metta is a mental factor. Not an emotion. It is a constant pratice. Daily living. It is ideal for anger prone people.

Mr MWP showed some initiative in choosing a nom de plume that was at odds with his background. Notwithstanding his mistreatment of his wife, there must have been something about the qualities of Lovingkindness that inspired him to do this. I doubt whether his associates would be qualified to encourage him to deepen his knowledge in this area. I wonder do you think it might be beneficial to contact him? Let's not forget the story of Angulimala who was a serial killer, but managed to change his life around. Speaking from my experience, we can never predict the outcome of even the smallest act of kindness.

Bhante, I have a question. After doing metta meditation and mindfulness of breathing meditation, I found that my general well-being, calmness and concentration have improved and I m able to focus better. So now I am able to stay with the breath most of the time no matter what I do and I can maintain one-pointedness in conjunction with my breath in meditation, so what should I do next? Start contemplating by doing vipassana? I am a bit confused n lost, bhante.

Please write to me at pitijoy@yahoo.com and I will answer your question.