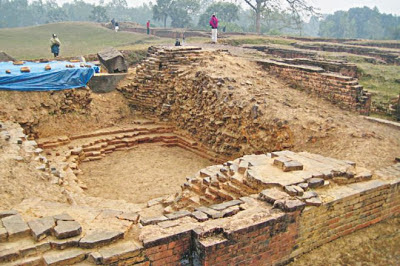 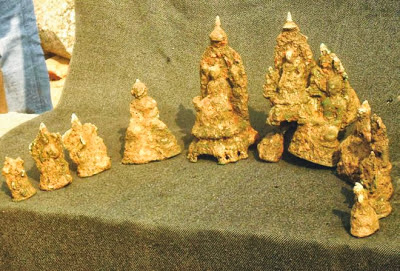 Several bronze-made Gautama Buddha sculptures and some other artefacts, including an ancient brick-built structure with a lotus-shaped inflorescence have been found recently during an excavation at Jagaddala Budhha Bihar archaeological site,   some sixty five kilometers away from Naogaon in Bangladesh. Though many Buddhist monasteries  have been discovered in the country, all of them were square or geometrical in shape, only this one is shaped like a lotus inflorescence, said archaeologists. Mahbub Ul Alam, one of the members of the excavation team and custodian of Paharpur Buddha Bihar Archaeological Museum said that some rare sculptures of Gautama Buddha were found, including some ancient brick, granite and black stone built structures and four cells of Buddhist monastery have been found in an excavation at Jagaddala Bihar recently. “They also found precious stones, ornamental stone pieces, ancient brick staircases and broken earthen pots”, he said. The structure was built in the 10th or 11th  centuries during Pala dynasty. “The locals had their doubts about the authenticity of the Jagaddala Bihar. We are now sure that this is the original Jagaddala Vihara”, he said. He  added, “It is a rare discovery for our country.”
Jagaddala Mahavihara was a Buddhist monastery founded by the later kings of the Pala dynasty, possibly Rampala (1077-1120), most likely at a site near the present village of Jagaddal in Dhamurhat Upazila in the north-west Bangladesh on the border of India, near Paharpur.
Little is known about Jagaddala compared with the other mahaviharas of the era such as Nalanda. For many years, its site could not be ascertained. AKM Zakaria inspected five likely locations, all called Jagddal or Jagadal, in the Rajshahi-Malda region- namely Panchagarh, Haripur upazila in Thakurgaon, Bochaganj upazila in Dinajpur, Dhamoirhat  in Naogaon, and Bamongola of Malda in India. Of these, significant ancient ruins were present only near Jagddal. Excavations under UNESCO over the past decade have established the site as  the once famous  Buddhist monastery.
A large number of  monasteries  were established in ancient Bengal and Magadha during the four centuries of Pala rule in north-eastern India (756-1174 AD). Dharampala (781 – 821) is said to have founded 50 viharas himself, including Vikramshila, the premier university of the era. Jagaddala was founded toward the end of the Pala dynasty, most likely by Ramapala (1077-1120). According to Tibetan sources, five great mahaviharas stood out, Vikramshila, Nalanda, Somapura, Odantapura and Jagaddala. The five monasteries formed a network under state supervision. Jagaddala specialized in Vajrayana Buddhism. A large number of texts that would later appear in the Kanjur and Tenjur were known to have been composed or copied at Jagaddala. It is likely that the earliest dated anthology of Sanskrit verse, the Subhasitaratnakosa, was compiled by Vidyakara at Jagaddala toward the end of the  11th  or the beginning of the  12th centuries. Sakyasribhadra, a Kashmiri scholar who was the last abbot of Nalanda Mahavihara and instrumental in transmitting Buddhism to Tibet, is said to have fled to Tibet in 1204 from Jagaddala when Muslim incursions seemed imminent. Historian Sukumar Dutt tentatively placed the final destruction of Jagadala to 1207; in any case it seems to have been the last mahavihara to be overrun.  In 1999, Jagaddala was submitted as a tentative site for inclusion on the list of UNESCO World Heritage sites. UNESCO reported that the excavation has revealed an extensive mound, 105 meters by 85 meters, which represents the archaeological remains of a Buddhist monastery. The findings have included terracotta plaques, ornamental bricks, nails, a gold ingot and three stone images of deities.
From News Network Archaeology
Posted by Shravasti Dhammika at 11:00 PM

A fantastic find and somewhat similar to the current excavations in Afghanistan.

Nice Info! It is the bestr time to invest in lucknow plots. Buy plots in lucknow and make smart verdict. You can use this property for individual use, or offer it for rent and generate a source of extra income.

Rampal also founded the city of Ramavati after winning back Varendri from the Kaivarta king Vim, who had usurped the throne. This city of Ramavati,now called Amati is in Uttar Dinajpur.Jaggadal Mahavihar was also built by him close to this city.Recently an image of Padmapani Avalokiteshwar has been unearthed in Itahar very near Amati. The Buddhist mantra "Om dharma hetu prabhava hetu tesham Tathagata e badat" in inscribed at its base. Most probably this belonged to Jagaddala Mahavihar which was located around present Itahar.

No , Ramavati is located in the south of jagaddala mahavihar . Also people thought that jagaddala located at itahar before 1996.but when jagaddala found in naogoan , then archaeologist suggested that ramavati is situated at naogoan , Bangladesh village named amair. many ancient materials has been found there