The Blind Men And The Elephant

The parable of the blind men and the elephant is probably the most widely known and the most loved of all the world's parables. By far the earliest version of  it is to be found in the Udana, one of the books of the Buddhist scriptures where it is attributed to the Buddha (Ud.67-9). There seems no good reason to doubt this attribution, for while the blind men and the elephant is a most memorable one, it is by no means the only cleaver parable attributed to the Buddha. The parable’s  appeal is due to how well it makes its point, its striking juxtaposing of man and beast and its gentle humor. 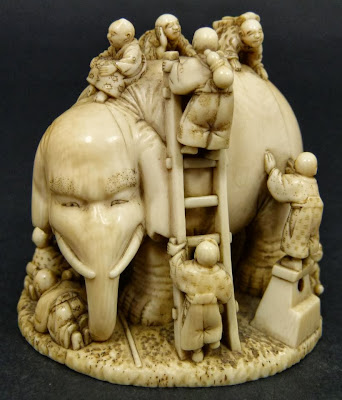 The background to the Buddha telling this parable goes like this. Some monks in Savatthi noticed a group of non-Buddhist monks quarrelling with each other about some philosophical or theological issues. Later, they mentioned what they had seen to the Buddha and he said:  “Wanderers of other sects are blind and unseeing. They don’t know the good and the bad and they don’t know the true and the false. Consequently they are always quarrelling, arguing and fighting, wounding each other with the weapon of the tongue.”  Then the Buddha related his famous parable.  “Once here in Savatthi, the king called a certain man and said   ‘Assemble together in one place all the men in Savatthi who were born blind.’  Having done as the king commanded, the king then said to the man ‘Now show the blind men an elephant.’ Again the man did as the king commanded, saying to each as he did   ‘Oh blind man, this is an elephant and this is its head. This is its ear. This is its tusk. This is its trunk. This is its body. This is its leg. This is its back. This is its tail. This is the end of its tail.’ This having been done the king addresses the blind men saying ‘Have you seen an elephant?’  and they replied  ‘We have sire.’ ‘And what is an elephant like?’  he asked. And the one who had touched the head said ‘An elephant is like a pot.’  while the one who had touched the ear said ‘An elephant is like a winnowing basket.’  The one who had touched the tusk said ‘An elephant is like a plough pole’  while the one who had touched the trunk said  ‘It is like a plough.’   The one who had touched the body said ‘It is like a granary’  and the one who had touched the leg said ‘It is like a pillar.’ The one who had touched the back said ‘It is like a mortar’,   the one who had touched the tail said ‘It is like a pestle’  while the one who had touched the end of the tail said ‘An elephant is like a broom.’  Then they began to quarrel saying ‘Yes it is!’  No it isn’t! An elephant is like this!’  ‘An elephant is like that!’,  until eventually they began fighting with each other.” Having told this story the Buddha summed up its meaning in a terse little verse -“Some monks and priests are attached to their views
And having seized hold of them they wrangle, like those who see only one side of a thing.” The key to understanding the meaning of the parable is in the last line of this verse; seeing only one side of a thing (ekanga dassino). This is but one example of where the Buddha gives advice about how to form a more complete, a more accurate view of reality. Here he is suggesting one important point - that we should not mistake the part for the whole. In other places he advises keeping personal biases out of the way when assessing views, taking time to form opinions and even when having done so, keeping an open mind so as to be able to consider fresh evidence to the contrary.  I notice that the Wikipedia article on this famous parable says that the blind men touch eight pachyderm parts while K. N. Jayatilleke (usually a very careful scholar) says there are ten. In fact, there are nine. I really  delight in the Buddha’s  comparisons. You can see women using winnowing baskets (sup or supli in Hindi, suppa in Pali) is any Bihari village even today and they  are shaped  just like an elephant's ear. The elephant’s tail and the broom is a good comparison too. The back with the pestle is less obvious. Could it be referring to the long ridge of the backbone which can so easily be seen under the elephant’s skin? After the Udana, the earliest mention of the parable of the blind men and the elephant is to be found in the Syadvadamanjari, a Jain work where it is used to illustrate the Jain doctrine of relativity of truth (anekantavada). This doctrine states that  “every view is true from some standpoint (naya) or other and in general no view can be categorically false.” Boy! Wouldn’t New Agers love this one if they knew of it! After this the blind men and their elephant  wandered all over the place. They appear in Brahmanical and Hindu works, in some Persian collections of stories and even in one of the works of the Persian  Sufi mystic Rumi. Today there are numerous children’s  books about it or which include it. If you would like to see a careful and accurate word by word translation of the whole sutta in which the parable of the blind men and the elephant appears have a look at Venerable Anandajoti’s www.ancient-buddhist-texts.net/Texts-and-Translations/Udana/6-Jaccandhavaggo-04.htm
Posted by Shravasti Dhammika at 12:12 PM

My name is Muhammad, and I'm an undergraduate from the National University of Singapore (NUS). Our group is currently doing a project on migration, and we're focusing particularly on the aspect of Buddhist religious migrants in Singapore, their lived experiences and the problems that they might face here.

I understand that you have had some experience, coming from Australia yourself, and I was wondering if it would be alright if we got some insights from you. I was browsing through your blog, and I found it really comprehensive and enlightening.

If you don't mind Sir, perhaps, if you're interested, then we could arrange for a face to face chat, or an online chat if you so prefer. My email is evps1@hotmail.com if you'd like to reply me via email instead.

Thanks so much Sir, and we're really hoping that we can hear from you, because it's not easy at all to hear from religious migrants here.

Rumi is a Persian poet, not a Turkish one.

Dear Afshin, your right, he was! I have made the change. Thanks for the correction

Dear Muhammad,I will be returning to Singapore on the 10th November. Please ring me at 63522859 a few days after that.