Fa-hein's Cave, The Making Of A Myth


Myths have an important  role in most religions. The very basis of some religions is a myth. Most of these myths are unconscious, i.e. they self-evolved through misapprehension and hearsay, they were kept alive by devotion and gullibility and in time became integrated into the religion and sometimes a central part of it. But others were deliberately manufactured. Some time ago  I became acquainted with just such an example of this. About  15 years ago a leading Sri Lankan newspaper ran a full-page story about a place called Pahiyangala, a cave where it was claimed the Chinese pilgrim Faxian (Fa-hein) stayed while on his way to Sri Pada when he was in Sri Lanka in about 410 CE.  The cave is in the vicinity of Sri Pada and  its name is, so it was claimed derived from the pilgrim’s name;  Pahiyan=Faxian, gala=rock. Intrigued but sceptical I did a bit of research and was soon able to dismiss the  story as baseless  and of very recent origin. 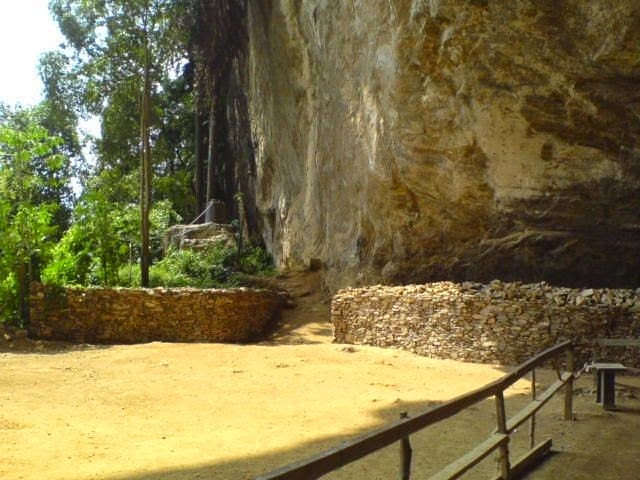 It is not difficult to see the problems with the Pahiyangala myth. It starts at the very beginning.  Faxian mentions Sri Pada in his travelogue, but he does not say he went there and thus  he would not have stayed in the nearby cave.  He does not mention the cave either. But even if he did go there that he, one of but many visitors, would have been remembered is implausible in the extreme. And even if he had been remembered he would have been known by his Sanskrit name, Dharmadassa, not his Chinese name. And why, it could be asked, would people in Sri Lanka decide to name a location after a (then) obscure foreign monk who stayed there for a day or two? Is there any material evidence for the myth?  Archaeological investigation of the cave shown that it has been inhabited since prehistoric times. Fragments of Chinese porcelain have been found there as they have been in many locations throughout Sri  Lanka. When I visited Pahiyangala the old abbot showed me a small piece of  such porcelain and with a straight face told me that it was “Faxian’s cup”. This would have to be the Dubai Burj Khalifa of tall stories, and the abbot knows it. Faxian was of course completely unknown in Sri Lanka and most of the rest of the world until the publication of Samuel Beal’s translation of his travelogue in 1884. In the decades after that Beals’s book must have been read by English speaking Sri Lankan Buddhists and at some point the then abbot of the Pahiyangala temple must have heard about it and the myth was born. 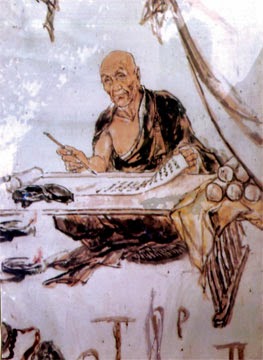 But why would  the abbot (or whoever)  do this. Did the original name of the cave sound something like Faxian and he put 2 and 2 together and came up with 15? (I have never been able to find out the pre-myth name of the cave). Did he do it on a whimsy? Did he do it in the hope of attracting visitors to an otherwise obscure and prosaic temple? I vote for this last possibility.  The earliest mention  I have been able to find to the  Pahiyangala myth is in a YMBA Vesak Annual from the early 1920s and I suspect that the story started around this time. But it has only been in the last 10 or 15 years that the myth has really began to get off the ground. The place now has its own website, it is mentioned in several tourist guidebooks to Sri Lanka and newspapers and at least one airline magazine occasionally  feature  it. About 10 years ago an official from the Chinese embassy in Colombo visited Pahiyangala and   donated a painting of Faxian (see picture) to the temple;  anything to promote a bit of  “China-Sri Lanka friendship”.
When I visit Bodh Gaya, Sarnath or other Buddhist sacred places  sometimes Pahiyangala story pops into my head and I think: “I wonder...”
Posted by Shravasti Dhammika at 1:09 AM

Never let the truth get in the way of a good story as they say.
Thanks for that one Bhante.