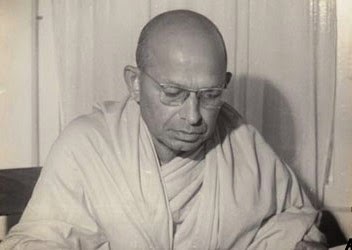 Venerable Walpola Rahula could not be properly described as a guru, he was more an academic and most of the teaching he did was in universities to fellow academics. He was however, probably the most well-known monk in Sri Lanka and even  famous  amongst Buddhists  throughout the West, at least by name,  through his  book What the Buddha Taught, considered by many to be the definitive introduction to Theravada Buddhism. I met Rahula on at least a dozen occasions during various events and conferences, the last time in Indonesia in 1991 when we were both staying at the Dhammacakkha Vihara in Jakarta.   He did part of his education in Colombo, London and at the Sorbonne, and later became Vice-Chancellor of Vidyodaya University and a professor at Northwestern University in the US.  Rahula was always interested in politics. His controversial 1946 book Bhisuvage Urumaya (The Heritage of the Bhikkhu) advocated monks having a role in politics and has encouraged monks ever since to do just that, with disastrous results for the Sri Lankan Sangha. In the 1990s he very much spoke for the “war party”, those Sinhalese who advocated a hard line in Sri Lanka’s civil war.  In all my contacts with Rahula I noticed that he was often dismissive and superior with fellow Sri Lankans and defensive and insistent when with Westerners, particularly academics. He tended to speak as if he assumed his comments on Buddhism, politics, Sri Lankan culture, etc. were to be taken as ex cathedra  and get irritated when they were not. This is not to say that he was not learned, he was, although judging by his output his reputation exceeded his abilities. Once we had a discussion on meditation during which he spoke learnedly but purely theoretically and at one point said: “That’s how it’s done although I don’t do it myself. No time!”
Posted by Shravasti Dhammika at 11:48 AM

I remember reading Zen and the taming of the bull, which was an anthology or collection of Walpola Rahula's most notable lectures over his career as a Buddhist scholar Monk. I was impressed that he seemed to have his finger on the pulse of the Buddhist phenomenon as it came to the West. So for me this book in particular had quite an positive influence on me early on in my journey into The Dharma. I still remember much of it and I still quote, it often.

Well, whatever dubious political opinions he may have had, he was a successful "dharmabhāṇaka" at least; his What the Buddha Taught was what moved me to finally take my practice more seriously and brought me from Zen to Theravāda.

Interestingly, when I tried to read his book again after I had learned much more about the Dhamma (including a deeper understanding of Mahāyāna doctrine), I found his writing style almost insufferable. So Ven. S. Dhammika's impression of him doesn't really surprise me that much. Today, I prefer writers who are a bit more deliberate and more cautious in their expression. Still, What the Buddha Taught is really good for beginners! :)

What the Buddha Taught merely presents a certain 'view' or 'interpretation' of Buddhism. It is not necessarily good for all beginners.