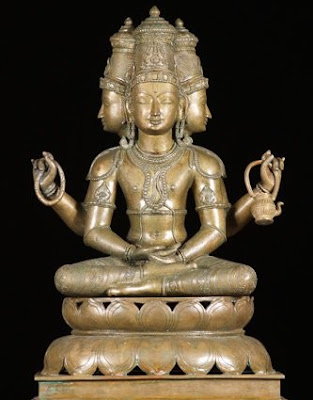 Numerous Vedic gods are mentioned in the Tipitaka, some of them being Inda also called Sakka, Aggi, Suriya, Canda, Varuna, Pajapati, Sri, Venhu (Sanskrit Visnu) Soma and Yama. By the 5th century BCE the god who had emerged as preeminent in Brahmanism was Brahma. He is described as  “All-Seeing, All-Powerful, the Lord, Maker, Creator and Ruler, Appointer and Controller, Father of All that Are and All that Shall Be” (M.I,327). He  “outshines all other gods in radiance”  and  “when he appears he assumes a grosser form because his natural appearance is not perceptible to the eye” (D.II,210). He was also believed to be a benign deity, loving and without anger or   ill-will (D.I,247) Devotees praised Brahma, called upon him for help and worshipped him with offerings and sacrifices. The hope was to be guided and protected by him in this life and be in fellowship with him (Brahmasahavyata, D.I,235) after death. Thus in most respects Brahma  is equivalent to the supreme deity of the major theistic religions.
While the Buddha acknowledged the reality of Brahma  he cast doubts on nearly every one of the claims made about him, thus indirectly rendering worship of and devotion to him meaningless. Far from being immutable Brahma  is subject to change and reverses (annathattam atthi viparinamo, A.V,60) like everything else. Brahma  thinks he created everything but he has misinterpreted the facts (D.I,18 ff), and when the Buddha asked those who believe in his creation to explain exactly how it happened  “they could not give a convincing answer” (te maya puttha  na sampayanti, D.III,28). Brahma  was believed to be omniscient but in his better moments he admitted being ignorant about many things (D.I,222). This supposed divine omniscience was further undermined by the Buddha’s  claim that Brahma  would often would come to praise him or to ask him questions about things he did not know, especially concerning spiritual matters (M.I,168; 326; S.I,139; 153).
The Jataka asked why, if Brahma  is all-powerful and all-loving, he did not do something about all the suffering and evil in the world. “Why does Brahma  not straighten out the world? If he really is the Controller, the Highest, Lord of All Beings, why is the whole world in such a mess? Why did he not make the world happy? If he really is the Controller, the Highest, Lord of All Beings, why is there so much deceit, lies, pride and unrighteousness? If he really is the Controller, the Highest, Lord of All Beings, then he must be unrighteous and cruel because it was he who made everything” (Ja.VI,208).
The word brahma comes from the root brh meaning highest, powerful, most excellent, and the Buddha used it as a name for some of his doctrinal categories. Thus the life of celibacy is brahmacariya, the four highest emotions are the Brahma Viharas, the Noble Eightfold Path is also called the  brahmayana, and the Dhamma is brahmacakka (M.I,69; 147; S.I,5). When the Buddha said he had  “become Brahma”  (brahmabhuto, D.III,84) he did not mean that he has attained union with God in the Vedic sense, but rather that he had realized the highest state, i.e. Nirvana.
The idea that “there are three gods in Hinduism; Brahma the creator, Visnu the  preserver and Siva the  destroyer” is, curiously enough, more well-known and widely accepted in the West than it ever has been in India. In perhaps the early Gupta period an attempt was made by a few theologians to reconcile different deities, the trimurti being the best example of this. Prof.  A. L. Basham correctly says that the divine trinity was an “artificial growth” which  had  “little  real  influence” and “never really caught on”. It is well-known in the West almost certainly because it is reminiscent of the Christian idea of the Trinity. In later iconography Brahma was depicted with four faces, four hands and riding on a goose (hamsa). Worship of Brahma has almost completely disappeared in India, but ironically he is still widely worshiped by Buddhists in Thailand where he is known as Phra Prom.
Posted by Shravasti Dhammika at 9:56 PM

The all-loving nature of Brahma appears to be something Buddhists have imputed in the Tevijja Sutta, which is part of the anti-Brahman propaganda in the Digha Nikaya (unlikely actually spoken by the Buddha but composed at a later time under Ashoka). I say this because the all-loving nature of Brahma is not a theme I have noticed in the many other suttas where the Buddha is chatting with Brahmans. Therefore, since it is the Buddhists that have probably imputed Brahma as all-loving; (just as the DN idiosyncratically defines the original Brahmans as "those who turn away from evil") it is the Buddhists refuting their own imputation when they question why Brahma does not stop the world's problems. That said, this Buddhist version of Brahma, probably developed during the missionary reign of King Ashoka, sounds very much like the contradictory 'Christianity' Jesus would soon after introduce into Israel and be crucified for. It is not logical an all-loving God can be the Creator of this defiled oppressive world. That said, 'Brahma' is really about the mind believing it is the creator of the world via 'nama-rupa'.