The Wheel Of The Dhamma


The wheel (cakka) is a flat circular object that turns as it moves. The ancient Indians used the wheel as a symbol for political sovereignty and dominion.  The first Buddhists used it as a symbol for sovereignty too, but for spiritual rather than for political sovereignty. The Buddha’s first discourse is called  ‘Setting in Motion the Wheel of the Dhamma’ (S.V,420 ff).  Generosity, kindly speech, doing good for others and treating them with impartiality are to the world, the Buddha said, what the linchpin (ani) is to the wheel (A.II,32), i.e. they keep it turning smoothly. A wheel flanked on either side by a deer has long been used to symbolize the Buddha’s teaching of this first discourse in the Deer Park at Sarnath. 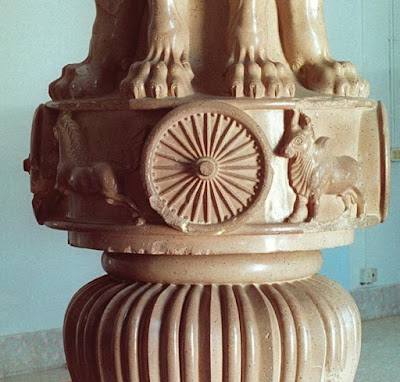 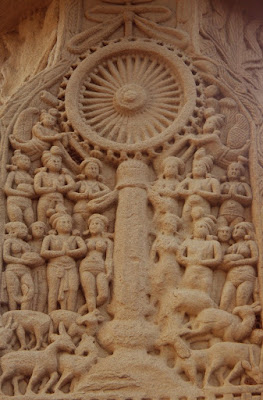 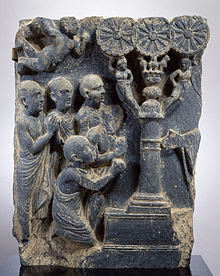 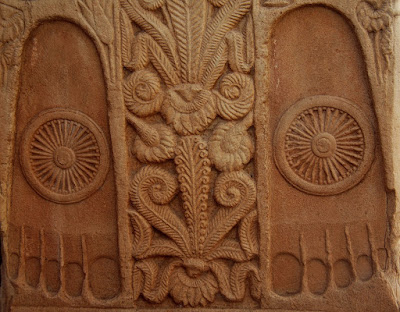 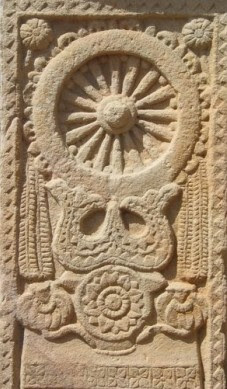 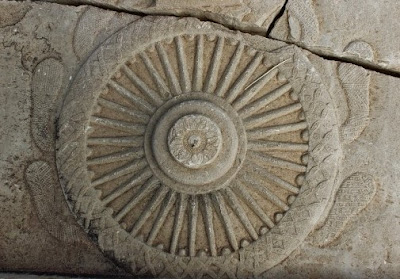 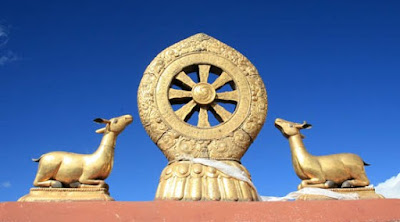 Today the wheel as a symbol for Buddhism is often depicted with eight spokes representing the Noble Eightfold Path although this is a relatively recent innovation. In the scriptures the Dhamma wheel, called either the Supreme Wheel (brahmacakka) or Highest Dhamma Wheel (anuttaram dhammacakkam, A.III,9; 148), is described as being  ‘a thousand-spoked’ (sahassaram, D.III,60). Until about the 3rd century CE the Dhamma wheel was almost always depicted with multiple spokes suggesting the thousand spokes. The oldest depiction of the Dhamma wheel, on King Asoka’s lion capital, has 24 spokes. The most spokes on a Dhamma wheel from ancient India that I have been able to find is 32.
Before the advent of statues, the Buddha was often represented by a wheel. What the cross is to Christians, the menorah to Jews the ying yang symbol to Taoists and the Om sign to Hindus, the wheel is to Buddhists.
Posted by Shravasti Dhammika at 8:01 PM

As far as I know the Dhammacakka is so-called because it recalls the four noble truths being turned three ways, as it said in the sutta itself (http://www.ancient-buddhist-texts.net/English-Texts/Short-Pieces-in-English/Dhamma-Wheel.htm:

But when to me, monks, in regard to these four noble truths - turned like this, in three ways, twelvefold (tiparivaṭṭaṁ dvādasākāraṁ) - knowledge and seeing as it really is was quite clear then, monks, I did declare to the world with its gods, Māra, and Brahma, to this generation, with its ascetics and brahmins, princes and men, that I was fully awakened with unsurpassed complete awakening.

It is curious then that we find hardly any representations of the wheel having 12 spokes.

I had translated one of the articles you posted at this Blog:
http://yifertw.blogspot.tw/2014/07/shravasti-dhammika.html
May I have your permission to translate this article and post it in both English and Chinese (side by side)?

Dear Ken, you are welcome to translate this material. But please give me the link to it when you have done it and please let me know where you are – Hong Kong, Singapore? Malaysia? Taiwan?

Bante,
My post is at Taiwan.
My serious articles are posted at https://independent.academia.edu/KenYifertw.
I shall forward the link of it once when it is done.

Dear Ken, thanks for that. I am interested to see that a lot of your academic writing is about the Chinese Agamas. Please contact me on pitijoy@yahoo.com and I will send you some of the material I have written.

Dear Bante,
I am planning a stay in Malaysia to study with my teacher, Ven. Dr. Dhammadipa Sak, with a possible stopover in Singapore. Happy to discover a strong Buddhist presence there. Could I perhaps spend a day or two at your temple?
With Metta,
Michael