When I was staying in Frankfurt I came to know that Arthur Schopenhauer's grave was just a ten minutes walk away in the city's Hauptfriedhof Cemetery. Although I have never read all the way through Die Welt als Wille und Vorstellung (has anybody?), I have read parts of it and I am familiar with the general principles of Schopenhauer's thinking. As is well-known, when the first books explaining Buddhism came to be published in the West, Schopenhauer was intrigued, not to say, highly pleased, that the Dhamma was so similar in some ways to his own philosophy. He wrote: 'If I wished to take the results of my philosophy as the standard of truth, I should have to concede to Buddhism pre-eminence over the others. In any case, it must be a pleasure to me to see my doctrine in such close agreement with a religion that the majority of men on earth hold as their own, for this numbers far more followers than any other. And this agreement must be yet the more pleasing to me, inasmuch as in my philosophizing I have certainly not been under its influence. For up till 1818, when my work appeared, there was to be found in Europe only a very few accounts of Buddhism.' I have also long admired the grumpy old philosopher because he was an early advocate of animal rights, or at least to the virtue of kindness and respect for animals. I quote him again: 'Since compassion for animals is so intimately associated with goodness of character, it may be confidently asserted that whoever is cruel to animals cannot be a good man.' 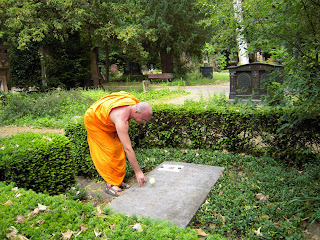 Anyway, coming to know that he was buried just down the road, Herbert took me to see the grave, buying a carnation on the way. The grave is to the left of the entrance, in a rather beautiful corner and surrounded by a low hedge. I lay the carnation on his grave and radiated metta to the great man. Then we took a walk through the lovely old cemetery. It was a most pleasant afternoon.
Posted by Shravasti Dhammika at 1:15 AM

I have, in fact, read through "The World as Will and Representation" in full. Glad of it too, because it was through readings of Schopenhauer and Carl Jung when I studied philosophy/psychology that I first became aware of Buddhism on a deeper level.

Well, I suppose there's the answer to the question 'Who has?' Kathleen has! Thanks Kathleen.

lucky Schopenhauer! got both carnation and metta!!

A deep Schopenhauer lover myself, very misunderstood a philosopher and all too often quickly discarded as labeled as a "pessimist"..
Very frustrating... So be it!
Corinne.

So glad had the chance to be there. I can only second the remarks of Dmitri from 8 March, 2011.---btw I have read "The World as Will..." cover to cover once every year since 1984 (Volume One only). Always a delight. Thanks for your post.