The Buddha Of Kurunegala

Kurunegala is a town in central Sri Lanka about 94 km north of Colombo. The town itself is situated on one side of an enormous hummock called Ethagala Rock some 4 km. long and 316 meters high at its highest point. It’s not a collection of rocks but a single lump of rock, or at least that’s what it looks like, without a fissure, a crack or joins in it. In my travels around Sri Lanka I sometimes used to pass through Kurunegala, look up at the smooth sides of the rock and think to myself, ‘Anywhere else in the Buddhist world, in ancient China, Afghanistan or India, someone would a carved a cave temple or a giant Buddha out of that rock’. Then some years ago someone constructed a Buddha statue on the top of the rock so that now Kurunegala joins quite a few other Sri Lankan towns in having an ugly, square-featured Buddha statue gazing over it. Recently a local monk Ven. Egodamulle Amaramoli Thera, has began decided to do exactly what I had thought about all those years ago. At an estimated cost of Rupees 25 million he is having a gigantic Buddha carved out of Ethagala Rock. The president of Sri Lanka has most generously donated Rupees two million five hundred thousand of the taxpayer’s money to the project and of course with the economy in a mess, violence in the streets and nearly a million displaced people in the country, a second Buddha statue right next to the earlier one is exactly what Sri Lanka needs right now. However, this scheme might just end up being different from all the other ‘Lets build another useless, artless, giant Buddha’ projects which seem to be such a feature of Sri Lankan Buddhism. Ven. Amaramoli has commissioned the Indian sculptor Padmasri Muttiah Stapathi and his team of helpers to both design the image and carve it. The results so far are very impressive. Hopefully the people of Kurunegala will soon have a beautiful Buddha image, the sight of which will inspire and uplift them as they go about their daily affairs. 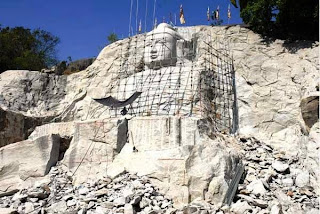 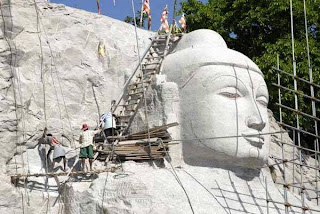 I'll take some pictures of this when I visit Kurunegala in May. My teacher's temple is near there I think.

A promising beginning! Thanks for the heads-up.

I wonder if you could help me, I am writing a novel based in Sri Lanka and one of my characters travels through Kurunegala in 1984. Was the Buddha statue on top of Elephant rock at that time, do you know?