When the Buddha arrived in Kusinara and lay down between two sal trees, they burst into flower out of season and sprinkled their petals over him. Ananda expressed amazement that the very trees were revering him, the Buddha said: “Ananda, these sal trees burst into flower out of season in homage to the Tathagata and covered his body…But the monk or the nun, the lay man or the lay woman who lives practicing the Dhamma properly and perfectly fulfills the Dhamma, he or she honors, reveres and respects the Tathagata with the highest homage” (D.II,137-8). Being Vesakha I thought it appropriate to say something about sal trees.
The sal tree (Shorea robusta) is sala in Pali and occasionally assakanna because the leaves resemble a horse’s ear (Ja.VI,528). Sal is a majestic tree growing up to 45 meters in height and having a girth of 3.6 meters, with ovate oblong leaves and pale yellow flowers. Its difficult to find huge sal trees today, they are 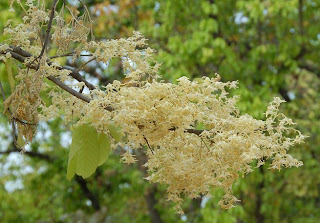 almost always cut down before they become what the Buddha called “forest monarchs” (vanaspati, S.IV,302). Once I saw one on the edge of Corbett National Park that must have been about 40 meters and I am told that there are still giants growing in Royal Chitwan National Park in Nepal. The tree is described as having dark green leaves, a straight trunk and being beautiful to see (Ja.V,251). In the light of this story and the belief that the Buddha passed away during Vesakha, it is interesting to note that the sal usually blossoms in March-April and occasionally in May, if there has been a lot of rain. The huge sal trees that grew in the lower reaches of the Himalayas had leaves and foliage, bark and shoots, soft wood and heart wood (D.III,152). The Buddha described how a man would make a boat out of a sal trunk. First he would locate a large tree in the forest and cut it down with his ax. After shaping the exterior and hollowing out the inside, he would them further shape it with a scraper and then smooth it with a rock ball. Finally, he would fix a rudder, make a pair of oars and then slide it down to the river (A.II,201). The Buddha also describes a man going to a sal forest near a village and thinning the other trees and the crooked sal saplings so that the other Sal trees would grow bigger and straighter (M.I,125). Sal trees were sometimes strangled by parasitic vines (Dhp.162). The Buddha once said that his Dhamma was so convincing that if the great Sal trees had consciousness and could comprehend, even they would benefit from it (A.II,193). One moonlit night, Ananda and Revata went to visit Sariputta at the Sal forest of Gosinga which was “delightful…with all the trees in full bloom and with a heavenly fragrance wafting through the air” (M.I,212). Sometimes gruel was made from or flavored with sal, either the flowers or perhaps its resin (A.III,48). The sal was and continues to be even today an important source of timber in India.
The picture above is of sal blossoms. A scan of the internet shows that flower of the Cannon-ball tree is almost universally confused with the flower of the sal tree. For something on this confusion have a look at
http://sdhammika.blogspot.com/2008/05/cannon-balls-and-confusion.html
Posted by Shravasti Dhammika at 5:26 PM

Thanks Bhante, and what great timing!
I'm currently reading "Rude Awakenings: Two Englishmen on foot in Buddhism's holy land" by Ajahn Sucitto and Nick Scott.
In the book they both mention the Sal tree (and its dismal disappearance in India), but I had no idea of what it looked liked. I'm quite surprised that it could reach such great height and girth! Shame they are increasingly rare to find these days, especially in their most impressive time of life. That's one big tree!