The Buddha And Trees III

The ancient Indians believed that trees would give their bounty on condition that they were treated with a degree of respect and the Buddha told a story to illustrate this very point. Long ago, the mythical King Koravya had an amazing banyan tree in his realm which bore fruit of exceptional sweetness. Everyone in the realm enjoyed the fruit freely and so there was no reason to guard the tree. But one day a man ate his fill of the fruit then broke a branch and went away. So angry was the spirit of the tree by this ingratitude that it caused the tree to bear no more fruit (A.III,369-70).
As an act of public service the Buddha also encouraged the planting of fruit trees along roads to offer both shade and food for travelers (S.I,33, something that King Asoka was to do in later centuries. It also became a custom amongst the early Buddhists to repair roads by filling in pot holes, removing large stones and cutting down the trees that might strike the axles of passing chariots and carts (Ja.I,199). 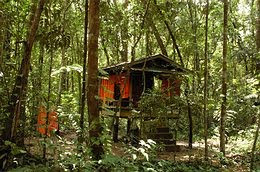 Posted by Shravasti Dhammika at 1:53 AM