Throughout history the vast majority of Buddhists got nearly all their Buddhism from the Jatakas and one or two popular accounts of the Buddha’s life. For most, the Jatakas stories was their Buddhism. The importance of these stories in Buddhist lands is similar to that of biblical stories in Christendom. Their influence on the arts, literature and thinking can hardly be overestimated. It is interesting therefore that the Jatakas are so neglected by Western Buddhists who usually pass them over as being ‘wonderful for the kids’. The complete Jataka was translated by Cowell, Charmers, Rouse, et el, over a hundred years ago and it has never been done again since. There have been several good anthologies though, the most recent being Sarah Shaw’s translation of 26 stories with its excellent introduction published by Pen

guin Classics.
But now the Buddhist Publication Society has issued a three volume re-telling of the Jatakas, probably the most ambitious publishing endeavour the Society has undertaken in its 52 years history. Called The Jataka Tales of the Buddha - An Anthology, it is a re-telling of 217 of the 547 stories, a whopping 1298 pages altogether. While I believe a new translation of this most important book is long overdue, a re-telling of them, like this one, has been needed for a long time too. In its original form the Jatakas can be tiresomely repetitious and annoyingly meandering and a good number of stories differ only little from others. The continual jump from prose to verse can be distracting too, particularly when the verses simply repeat what has been said in the prose. Ken and Visaka Kawasaki, who have done this new book, have removed all the extraneous material, rendered the verse into prose and tightened up the stories where necessary, without changing the story line or excluding anything of importance. The result is a very readable, non-scholarly but still authentic re-telling of these wonderful stories.
The Jatakas are of great interest on many levels. The picture they paint of Indian society during the time they were composed (5th -2nd cent. BCE ?) is a rich and fascinating one. While the Vinaya gives us an idea how monks, and to a lesser extent nuns, thought and behaved in the first few centuries after the Buddha, the Jatakas tell us about ‘non-specialist’ Buddhists – the ordinary people, princes and paupers, merchants and craftsmen, men, women and children, the good, the bad and the ugly. While the sutta and the Vinaya never once, to the best of my knowledge, deal with moral dilemmas, some Jataka stories do just that. You might say that the suttas present morality in its most pure and ideal form while the Jatakas talk about the actual situation ‘on the ground’. Just as importantly, they also illustrate many virtues and values not found in the suttas. And they often do all this with sense of humour, something that is not absent from the suttas but is not exactly common in them. Having said this, it is also true that the hero of each Jataka story (always the Bodhisattva) sometimes cuts ethical corners and dishes out rather rough justice to the villain. And one or two stories are outright raunchy; definitely not suitable for kids.
The three volumes of The Jataka Tales of the Buddha are presented in an attractive (although rather flimsy) box and there is an excellent map, useful to help the reader locate the scene of some of the stories and get some idea of the Jataka’s geographical range. There is also a table of correspondence and the chart of the 31 planes of existence, useful given that various divine beings appear so often in the stories. The glossaries of important terms and of personal names could have been more comprehensive and the recommendation for further reading should have perhaps included Gombrich and Cone’s The Perfect Generosity of Prince Vasantra, Ratilal Mehta’s Pre-Buddhist India, a detailed study of the Jataka’s cultural milieu, and Wintenitz’s History of Indian Literature with its detailed analysis of the age, structure and influence of the Jatakas. But I’m only being a nitpicker here. The BPS is to be congratulated for undertaking what must have been a huge committment and the Kawasakis are to be thanked for the enormous amount of work they have put into it. The Jataka Tales of the Buddha is an excellent recourse and should be in every Buddhist’s book shelf. You can find ordering details at www.bps.lk/new_releases.asp
As an aside, when I was at Borobudur recently I recognized this depiction of the lovely Vattaka Jataka in which a brave little quail puts out the raging forest fire; number 20 in the book under review, number 35 in the Jataka. 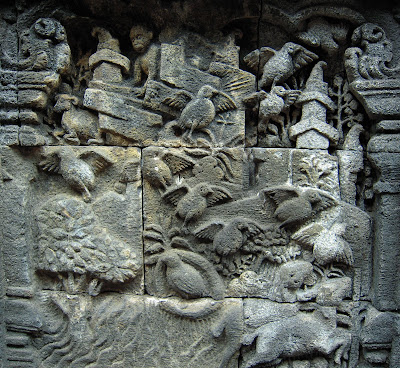 Posted by Shravasti Dhammika at 1:06 AM

Thank you, Bhante, for your wonderful review of our book. We would like your readers to know that they can purchase a signed copy of the set from Buddhist Relief Mission at:
With metta,
Ken and Visakha Kawasaki

Thanks to both of you! We've been looking for, well - "a new Jataka" - and this is a great opportunity to pick up these volumes and try to be helpful at the same time.

Horray to Ken and Visaka Kawasaki! Very well done, might this accrue a lot of merit to you!

If only there were today a bold little quail like the Vattaka Jataka's, she ought to be sent to Russia! :-)

Thank you for writing about this — as a teacher of storytelling I often pair up Jewish and Buddhist stories to illustrate the similarities and difference. And sometime to show how the same story moves and changes over time, geography and culture while remaining essentially the same. This is a definite addition to my collection.