On Sunday the 5th of September our group, the Buddha Dhamma Mandala Society, held a book launching ceremony for my new publication To Eat or Not to Eat Meat. In it I argue that while the Buddha did not advocate vegetarianism, avoiding eating meat is more in harmony with the Buddha’s teachings of care and compassion for others. A large crowd turned up and after my usual Sunday morning sermon I spent time signing copies of the book for people. Already someone has offered to reprint 2000 of the book. 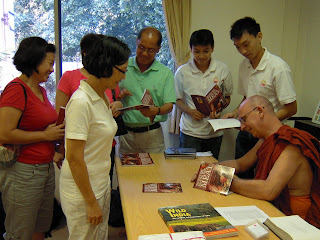 Then on the afternoon of the next Sunday (i.e. the 12th) some friends and students accompanied me down to Peninsular Plaza to distribute 100 copies of the Burmese translation of my book Good Question Good Answer. Peninsular Plaza is the main meeting place for Burmese working and studying in Singapore and large crowds gather there on weekends. Several shops in the Plaza have small lending libraries and one Buddhist group has a small drop-in centre with a lending library. It also distributes books for free and occasionally organizes weekend talks. This is the third time we have distributed the Burmese Good Question Good Answer amongst Burmese expatriates and apparently it is proving to be very popular. 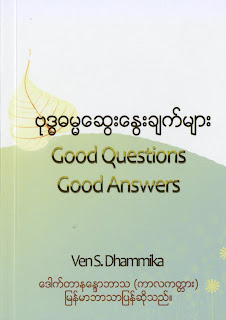 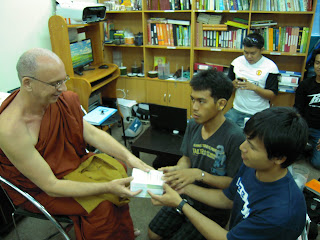 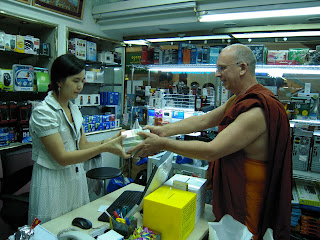 Posted by Shravasti Dhammika at 1:21 AM

Sadhu! Sadhu!! Sadhu!!! Great to read about your book launch and especially to learn this was the THIRD distribution of the Burmese translation of GQGA!

Just received a copy of your book. Thanks.

May I put in an unsolicited comment? The book cover is a bit gory; not very nice for display. Perhaps the picture on the last page of the book with all the lovely animals may be more appealing to the eyes : "LOVE US, NOT EAT US! All lives are pecious"

I have bought two of Bhante's pilgrim's guide books, albeit in a discounted price. I hope Bhante won't feel bad about that. Anyway, I hope Bhante's new book will be available in BPS here in Sri Lanka. :)

Dear Chela, my new guide book ‘Mount Kailash, A Pilgrim’s Companion’ will be out at the end of the month. Hopefully it will be available in Lanka.

I would like to have both your books, To Eat or Nor To Eat Meat, and Good Questions Good Answers in English.

Where can I find them in KL? Or any Buddhist associations in Malaysia are distributing them? Or they can be sent by mail?

I hope you shall respond.

Just finished reading a copy of ur book "to eat or not to eat meat". It is really good that this book is being distributed!

Reading on ur previous post vegetarianism VI, I noticed a question posted:

"If vegetarianism is more consistent with the Dhamma why didn’t the Buddha endorse it?"

My 2 cents as follows:
In the Pali Canon, although vegetarianism is not clearly endorse, the basis of this can be build on the teachings of metta and karuna.

Mahayana sutras such as the Shurangama Sutra does endorse vegetarianism clearly, and also endorses the abstaining from using animal products such as silk etc.

However, I believe the Buddha did not set up a strict endorsement for veg because of the different tendencies of sentient beings. Some sentient beings love meat, if a strict rule on veg is endorse, they may not want to leave the home life to cultivate and cut off their path to liberation. So the teachings have to offer some flexibility in this area to cater for all beings.

Thanks Bhante !! I am searching this book in Hindi . Is there any available translation in Hindi too ?

Dear Chintan,
There is no Hindi translation as yet, despite many efforts on my part to have it done. one. Would you like to try doing one?

Thanks Bhante !!sure & I need your permission to translate in Hindi ..