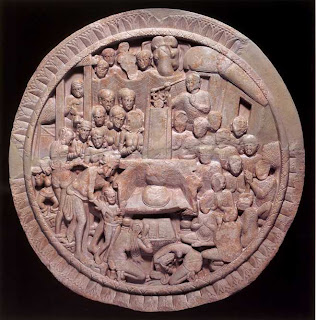 Everyone knows the story about Yasodhara, the Buddha’s wife - you know, the beautiful young maid, the competition to win her hand, her happy life with Prince Siddhattha, her slumbering with Rahula as her husband left the palace at night and, when the Buddha returned to Kapilavatthu, her telling Rahula to approach the Buddha and ask for his inheritance. What most people don’t know that Yasodhara is not mentioned by name anywhere in the Tipitaka and that none of these stories, except the last one, appear there either. And even this last story, ‘Rahula’s mother’ as she is called there, makes only the briefest appearance (Vin.I,82). All the rest comes from the later Buddhist tradition; a bit from the Pali commentaries and much more from other ‘Hinayana’ literature. And while Yasodhara is literally a non-person in the Pali Tipitaka and little more than that in the commentaries, there are many legends about her, some of them quite interesting, in later Sanskrit literature.
The great Buddhist scholar Andre Bareau has written a most fascinating article on the Yasodhara legends which is now available at http://www.buddha-kyra.com/wife.htm Kyra Pahlen, who translated this article from French did a rather poor job - Kathmandu instead of Kapilavatthu, Mahavasti instead of Mahavastu and even Solomon instead of Suddhodana!!! But don’t let these and a few other clangers put you off this most interesting bit of research.
The top picture is a sculptural representation of the Kapilavastu incident from Amaravati (4th cent.). The Buddha is represented as an empty throne. The next picture is of a painting of the same story from Ajanta (7th cent.) while the last one is a 19th century Thai painting. 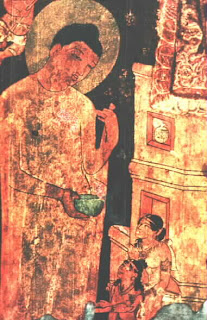 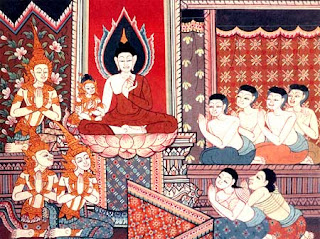 Posted by Shravasti Dhammika at 8:30 PM

In Judaism this impulse to fill in the missing pieces of the story by creating more stories is called Midrash.

Every Jewish child can tell you the story of Abraham smashing the idols in his father's shop. However there is no such story in the Hebrew Bible.

This creative impulse, while often not in any way factual, is usually true in the deeper sense of the word.

This happens in history: American children learn about George Washington chopping down the cherry tree as though it were true. It was created by a pastor after GW's death.

But just because it didn't happen doesn't mean it isn't true.

The appearance of Yasodhara in fact makes women visible.

And so I have a question, not having read this anywhere, I have heard in stories told that at one point the Buddha's wife and mother pushed him to accept women into their own monastic order, after he admitted women could achieve enlightenment — but he objected saying that by creating such an order it would shorten the time the teaching would remain pure.

I suspect you are the one who can tell me if this is so, or mangled, or what. And if so, where the text is.

Dear AQJB,
The story you are referring to is well-known although usually in a mangled form. The Buddha’s mother, Maha Pajapata Gotami, asked him to allow her to be ordained, i.e. become a nun. Three times she asked and each time he refused. Finally Ananda intervened, asking the Buddha whether women can attain enlightenment. The Buddha acknowledged that they are as capable as of attaining enlightenment as men are. Ananda then mentioned that MPG had nurtured the Buddha and brought him up and that on this account he owed her much. The Buddha then relented, saying that he would ordain women on condition that they accept eight extra rules, four of which mean that they would in some way be subordinate to monks within the monastic context. Then he said, almost as if he already regretted what he had just allowed, ‘If women had not been allowed to ordain the brahmacariya would have lasted a thousand years. But now… it will only endure for five hundred years’ (Vin.II,253-6).

This last part of the story is usually misunderstood to say that the Buddha was predicting that Buddhism (i.e. the Sasana) will only last 500 and that women would be responsible for this. It says no such thing! Brahmacariya here refers to the discipline of celibacy. What he was saying was that with both monks and nuns together celibacy will now be twice as difficult and that within 500 years it will break down. And of course because sex (at least most sex) requires two people, monks and nuns will be equally responsible for this.

And history verifies the Buddha’s prediction. Records from the 4th century CE onwards show that there were places where monks and nuns were indeed ‘shacking up’ together. There were periods in Sri Lankan history when this became widespread, although celibacy was always eventually re-established. With the rise of Tantra in India (8th cent onwards), later in Tibet and more recently in Korea there were/are married ‘monks’ and in Japan all ‘monks’ are married. Now of course you don’t need nuns for monks to abandon celibacy (or vica versa), they could (and did) take lay ‘wives’. However, frequent contact between monks and nuns did make it easier. So I think the Buddha’s reservations were justified, although ultimately he was wrong. Except in Japan and within certain Korean and Tibetan sects, celibate monks and nuns are still the majority. I’m sure the Buddha would be delighted if he knew he was wrong.

Dear AQJB,
You asked for and I forgot to give you the reference for this story. So here it is. It occurs in the 10th chapter of Cullavagga of the Vinaya Pitaka (The Rules for Monks and Nuns). In the Pali Text Society’s translation of the Vinaya, ‘Book of the Discipline’, it is Vol.5, page 352 onwards.

I thought it was 'mishegas' not midrash. (just kidding)

Ah poor Yasodhara. Just typical of ancient texts that women are invisible or are just some sort of property. Could it be that even if she actually had some roles regardless of being negative or positive (like for example she either encouraged or resented her husband in pursuing spiritual life), her roles just got omitted from the text because she's only a woman. Being noble or not, enlightened or not, those who preserved the Tipitaka must have been mostly males. Or, the Buddha's wife was simply a quiet and meek woman with no words of her own.

As people who love the Jatakas, we hardly feel Yasodhara (Rahulamata
Vin.i.82, Bhaddakacca, Bimbadevi J.ii.392, DA.ii.422, and Bimbasundari J.vi.478) to be "an invisible woman."
If someone first limits what he regards as "authentic" to the suttas, he shouldn't then turn around and complain that "Buddhism" ignores or discriminates against women when there is nary a mention of Yasodhara. When Terasi writes: "Ah poor Yasodhara. Just typical of ancient texts that women are invisible or are just some sort of property." he is ignoring the Jatakas where Yasodhara often played a courageous and splendid role. He's also dismissing, then damning, the stories we have of Yasodhara eating only one meal, sleeping on the floor, and wearing renunciate's robes after her husband left home to seek enlightenment. He is also overlooking the commentarial account of her becoming a bhikkhuni under Pajapati Gotami along with of Janapadakalyani, being called Bhaddakaccana Theri, and becoming an arahant. She could, it is said, recall one asankheyya and one hundred thousand kappas. No mean feat.

If you don't accept or like the stories, you can't claim there aren’t any. The tradition, not found in the suttas, does not ignore Yasodhara and the Buddha is said to have taught those stories just so Yasodhara, and her remarkable capacity for loyalty, would be understood, respected, and praised.

Among the many stories found in the Jataka Commentary in which Yasodhara (Rahulamata) is identified include the Manicora Jataka, and the last, Vesantara Jataka, where she was the magnificent Maddi.

Dear K & V,
Actually you have made a very good point. In the later non-canonical tradition Yasodara is anything but invisible. Giving this point a bit more thought perhaps we could say this. The Tipitaka says almost nothing about the Buddha’s life before his Great Renunciation and therefore its not surprising that she gets so little mention. Suddhodana, etc, doesn’t get much either.

Ah I apologise if my comment made you uncomfortable. I was only expressing my reaction to Bhante's post. As for Jataka stories, I haven't even finished the first book from the set I ordered from you! You can take the comment as a blip of a beginner.

The words "invisible woman" called up to the still unreconciled disappointment of reading about bhikkhuni garu dhammas, and all the controversy surrounding bhikkhuni ordination. Women issue is the only thing that is very contradictory to my whole idea of Buddhism. As a woman myself, I can't understand why women are said to have the ability to achieve enlightenment just like men, yet were given garu dhamma if they want to ordain. I can't help to wish that the whole thing about garu dhamma, the idea that the teaching would shorten etc are just men's creative addition. The post baits my prejudice, and made me feel for Yasodhara, although as you explain, it's not exactly true.

Kindness and faithfulness keep a king safe, through kindness his throne is made secure. See the link below for more info.