I first became acquainted with Rabbi Hillel through the writings of Walter Kaufmann and took a shine to him straight away. In the years since then I have occasionally ‘bumped into him’ again and just recently found this article about him at Dhammawiki and thought I’d share it with you.
Rabbi Hillel (1st century BCE) was a famous Jewish religious leader, one of the most important figures in Jewish history. He is associated with the development of the Mishnah and the Talmud. Renowned within Judaism as a sage and scholar, he was the founder of the House of Hillel school for Tannaim (Sages of the Mishnah) and the founder of a dynasty of Sages who stood at the head of the Jews living in the land of Israel until roughly the fifth century of the Common Era. Like the Buddha and Greek philosophers, Hillel taught the Golden Rule well before the time of Jesus. When asked to recite the Torah while standing on one foot, Hillel stood on 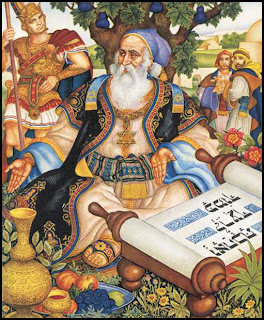 one foot and said, “That which is hateful to you, do not do to your fellow. That is the whole Torah; the rest is commentary; go and learn.” He is also known as the author of two popular sayings: “If I am not for myself, who will be for me? And when I am for myself, what am I? And if not now, when?” Although not a Buddhist, Hillel had teachings (such as the above) and a calm demeanor that was very Dhamma-like. The exhortation to love peace emanated from Hillel’s most characteristic traits - from that meekness and mildness which had become proverbial, as is seen from the saying: “Let a man be always humble and patient like Hillel, and not passionate like Shammai” (Shab. 31a; Ab.R.N.xv). Hille’s gentleness and patience are illustrated in an anecdote which relates how two men made a wager on the question whether Hillel could be made angry. Though they questioned him and made insulting allusions to his Babylonian origin, they were unsuccessful in their attempt. Hillel often debated with Shammai and on several issues, Hillel demonstrated a more open and compassionate mind: Admission to Torah study. The House of Shammai believed only worthy students should be admitted to study Torah. The House Hillel believed that Torah may be taught to anyone, in the expectation that they will repent and become worthy. Hillel wanted Judaism to be open to converts and Shammai wanted the faith open only to those born into the ethnicity and religion. Judaism tended to be more accepting of Shammai on this issue. In general, the House of Shammai’s positions were stricter than those of the House of Hillel. On the few occasions when the opposite was true, the House of Hillel would sometimes later recant their position; similarly, though there are no records of the House of Shammai as a whole changing its stance, a few individuals from it are recorded as deserting a small number of the more stringent opinions of their school, in favour of the viewpoint of the House of Hillel. http://www.dhammawiki.com/
Posted by Shravasti Dhammika at 1:06 AM