The Passing Of Sai Baba

A few days ago (24th April) India’s most famous god-man Sai Baba died. I thought it appropriate to reproduce something I wrote a few years ago about my meeting with Sri Baba.
I have just finished reading Paul William Roberts’ Empire of the Soul, the best travel book on India I have read for a long time. It is funny, perceptive and beautifully written. But for me the most interesting thing in the book, if only because it differed so much from my own experience, is Roberts impressions of Sai Baba, India’s most famous god-man. Roberts met Sai Baba and became a true believer and he describes the impressions and feelings that led to having such faith. Given Roberts’ ability to immediately see through Rajneesh (later known as Bhagawan and then Osho) I found this adoration rather strange. People have often asked me what I t 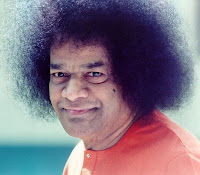 Thanks for the story. It concerns one really tricky subject - that of faith. In many Buddhist texts faith is an important aspect as it also is in Buddhist religion. At the same time - in the Dhammapada - it is said that the awakened ones are non-believers (asaddho). That might be an interesting comparison - while in theistic religions faith becomes stronger in the process of devotion, but in practising the 8-fold path initial faith in Buddha's enlightenment and teaching gradually fades replaced with growing knowledge that the Path is the real way to liberation. I winder if I got this quotation from your site:) but it explains everything: "«When a bhikkhu's mind, through absence of lust, does not attach to those dhammas which encourage attachment, is not averse ... is not deluded ... is not intoxicated, he will be without dread or perturbation, fear or horror, and will feel no need to believe in anything, even the words of a sage." [A.II.120]

i met you a long time ago. i can't find an email address to write to you properly from. i'm looking for a mutual friend, mike browning. maybe you know where he is. regards, ernie

The ability to perform miracles may not prove the holiness or divinity of Sai Baba, but neither does it disprove it. The reason I believe in Sai Baba is not because of his miracles, but because of personal experience. Whenever I am in his presense (with 2000 other devotees, so not really very close to him), I can feel some strong energy passing through my forehead into the rest of my body. This does not happen with any other person (actually I have also felt similar sensation with Ammachi also, but to a much lesser degree).

I sometimes wonder how much of the miraculous that swirls about the aura of Sai Baba is of the very same nature of the miraculous attributed to the Buddha in the Pali Suttas. Popular spirituality probably hasn't changed too greatly over the centuries, particularly in India.

I think there is a kind of miracles which disprove his holiness: http://www.youtube.com/watch?v=EwOecpMkHH0

I have seen sai baba , i can't surely say anything about him. I was not even close to him as you. But i didn't felt him divine. His message to the world is very simple as his miracles .

your writing is great, i enjoyed it, awesome. cool way to deconstruct baba the magician. sadly i must say, you yourself are a such a lost magician, you seek enligtement just like baba devotees sought circus tickets. instead seek self with self forgiveness. google self forgiveness desteni
thanks.