Hospitality (sakkara) is the act of being welcoming and helpful to guests (atithi or pahunaka), strangers (agantuka) and travellers (addhika). Throughout the ancient world hospitality, at least towards members of one’s own tribe or religion, was held in high esteem. In India it was restricted to some degree by the demands of the caste system. For example, the Manusmrti, the most important Hindu law book, says that a brahman should only offer hospitality to other brahmans and that he should neither greet nor return the greeting of monks or ascetics of unorthodox sects, although the more open-minded brahmans did not always agree with this(D.I,117). It was probably because of such ideas that, when the Buddha went on alms gathering in the brahman village of Pancasala, the inhabitants refused to give him anything, and he ‘left with his bowl as clean as when he had come.’ (S.I,114). For the Buddha, hospitality should be shown to all, whatever their caste, religious affiliation or status. When Siha, a leading citizen of Vesali and a generous supporter of Jainism, became a Buddhist, the Buddha asked him to continue offering his hospitality to Jain monks who might come to his door (A.IV,185). 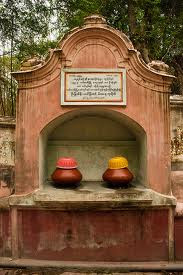 n says that the Buddha was ‘welcoming, friendly, polite and genial’ towards everyone who came to see him (D.I,116). One of the traditional duties of a lay person was to make the fivefold offering, one of which was providing food, accommodation and help to guests (atithibali), a practice the Buddha approved of and encouraged (A.II,68). When a monk turned up at a monastery, he asked the resident monks to go out and meet him, prepare a seat for him, bring him water to wash his feet, prepare accommodation for him and do other things to make him feel welcome (Vin.II,207-11). The Milindapanha said that, if a guest turned up at a person’s house after all the food had been eaten, more rice should be cooked in order to feed him and allay his hunger (Mil.107). The Buddha considered failure to reciprocate hospitality to be very bad form. He said: ‘Whoever goes to another’s house and is fed but does not feed them when they come to his house, consider him an outcaste.’ (Sn.128). The Jataka says: ‘If for even one night one stops in another’s house and receives food and drink, have no evil thought, for to do so would be to burn an extended hand and betray a good friend.’ (Ja.VI,310). 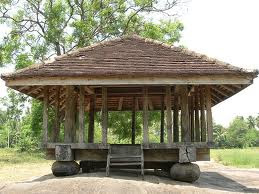 Today, with hotels and rapid transportation, hospitality to travellers as practised in the past is less relevant and less necessary. However, there are still many opportunities to be hospitable. Being newcomers to a Buddhist group, to the workplace or to the neighbourhood can be a time of awkwardness and uncertainty. Welcoming such people, making them feel at home and introducing them to others is an expression of kindness.

A type of indirect hospitality common in the Buddhist world until recently was making provisions for travellers and pilgrims. People would build rest houses (avasatha) on the edge of villages or towns or along roads where there was a long distance between villages. Other devout folk would undertake to supply these rest houses with firewood for cooking and water for drinking and to keep them clean. The Buddha said that planting trees (probably along roads), building bridges, digging wells, building rest houses and providing water for wayfarers, were all meritorious deeds (S.I,33).

In his Suhrllekha Nagarjuna urged his royal correspondent to ‘establish rest houses in temples, towns and cities and 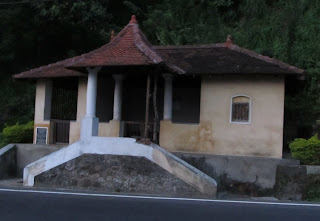 set up water pots along lonely roads.’ This last practice remains very popular in Burma. Groups of friends form what are called water-donating societies (wainay ya thukha) and undertake to place water pots along roads for the convenience of passersby.

The pictures show a typical wayside free water booth in Burma and two ambalama, resthouses from Sri Lanka, built as an act of generosity. The first dates from the early 19th century and the second from the early 20th century.

Posted by Shravasti Dhammika at 3:30 AM

In my travels around India I have been shown great hospitality and a warm welcome at all the viharas I have stayed in. I spent three months in Leh, Ladakh recently and the caretakers and monks were very considerate.

Even as an anonymous pilgrim in places like Kushinagar, Sarnath and Bodhgaya I was met with kindness by the monks when I stayed in their temples. This kind of custom truly facilitates fellowship on a deep level.

In East Asia as well this tradition continues, especially in Taiwan. They have pilgrim lodges and at the big monasteries buffet style dining halls for visitors without any set price. It is all by donation.

What a wonderful post! As a householder hosting guests I've been quite curious about what the Buddha taught about hospitality. Thank you for taking the time to teach me.

In Australia such hospitality can sometimes be seen along highways on a long stretch between towns. The Lions Club or similar charitable society sets up a caravan and serves free coffee and refreshments for weary motorists. I daresay these kind people may have even saved lives where a fatigued motorist might otherwise have driven on and fallen asleep at the wheel.

Hey Bhante, I thought this link might amuse you: http://au.christiantoday.com/article/the-dos-and-donts-of-witnessing-to-buddhists/12629.htm

hi Bhante,
will you be able to contact me? i have some personal help and questions i would like to ask you.
best regards,
polly
96481040

When I read this article I thought of the Little Free Library project, which is starting to really take off in the US. It seems that the natural tendency toward being kind to strangers, travelers, pilgrims and seekers continues to rear its delightful head, even now.

Very nice post from you. Every post you made added a lot of new things in my head about Buddhism.
Well, you are certainly someone reliable. Thanks for posting.