The Buddha And The Goats 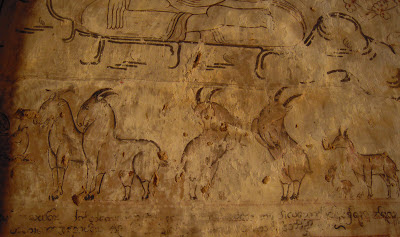 I was in Pagan examining  some of the beautiful  although mostly much faded paintings in its temples and I noticed something I have never seen in Buddhist art before. There was a   picture of the Buddha in the earth-touching gesture and on the pedestal (asana) below him was not the usual two deer,  two lions or two elephants, but a herd of goats. Goats!  Seven of them! – a billy goat and his mate, two youngsters rearing up and butting their heads, a mother and her kid  and another one just standing there. I was intrigued, so I took a photograph  of the picture.
A few hours later  at the Pagan Museum  I was in the upstairs gallery looking at all the Buddha images. On the pedestals of all the statues were the usual symbols and depictions – lions, deer, portraits of donors, Dhamma wheels, etc. But one stood out as being different from all the others. It showed  a goat  with a rope around its neck being pulled by a man. Now I was even more intrigued. I went downstairs, asked to see the curator, and after a few moments waiting, was ushered in to her office. I told her about the painting  and the statue pedestal and asked her what the goats could mean. Her polite smile could not disguise her discomfort at not knowing. She picked up the phone and a few minutes another woman appeared, apparently the curator of the images, an animated discussion ensued, and even though I know no Burmese I could see from this  second woman’s face that the goats were a mystery to her too. Still smiling the curator picked  up the phone again, talked for a minute, wrote down a number and  after hanging up, rung it. While waiting for a reply she turned to me and whispered,  “I’m getting Professor XYZ in Rangoon.” When  she got the professor  there was a long discussion and then the phone was handed to me. “The goats are about the Ajapala Nigrodha” he explained, hesitantly and completely without conviction.
Clearly the matter was a  mystery to him  too and he was taking a stab in the goat-inhabited darkness. The Ajapala Nigrodha, the Goatherd’s Banyan,  he was referring to is of course the tree at Bodh Gaya where the Buddha spent the second week after his enlightenment (Vinaya I,2). I thanked the curator for her attention and efforts to help and then continued on my way. As I passed through the museum’s gates onto the road  I was met by a small herd of goats. They walked passed me, but one stopped for a moment to stare at me with her big brown eyes, then hurried to join the others.
Can anyone explain why goats should be depicted on the pedestal of a Buddha image? Or does anyone know of other examples of this?

Posted by Shravasti Dhammika at 4:03 PM

Bhante, could it be related to Matakabhatta Jataka The Goat That Laughed and Wept (Jat 18)?

A wild guess here, maybe a Buddhist version of Jesus as The good shepherd possibly influenced by Nestorian Christianity perhaps?
The script below may be the key.

Bhante, I discovered your blog last year while following links to Vimala Thakar's life and teachings. The solid scholarship, wide-ranging curiosity and good humor I have found here keep me coming back for every entry. Thanks so much! This blog is a generous gift.

Dear Javen, goats occasionally appear in the Jatakas but so do crabs, rabbits, crows, fish, buffalos, etc. but out of all these and others why goats? Dear Brahmavihara, Jesus is the good shepherd and his disciples are sheep. The Buddha once compared his disciples to deer (miga) – gentle, alert and living in the forest. And of course deer often appear on the pedestals of Buddha statues. But I know of nowhere where his disciples are compared to goats. So it would appear that the mystery remains. But you are right in saying that the key to unlocking the mystery may be found in the script below the painting, which unfortunately I cannot read. And Russell, thanks for the bouquets. Always welcome.

Maybe this is a kind of "goat wheel of becoming", I can't see a dying goat but all the other phases of life are represented. Why Goats are chosen as symbol of life and death in this case(assuming that my hypothesis is correct) still remains a puzzle. I know that in ancient Rome there was a fertility ritual,known as Lupercalia and celebrated 14 February (St Valentines) where a man dressed in a goat skin would symbolically "ravage" the unmarried young women and that the ritual is still carried out in Morrocco to this day called beau Jeloud as I recall. So maybe there is a link to the illustration as The Buddha is able to tame even this legendary potent force, just a guess.

From Dictionary of Pali Proper Names, it is said that one of the reason why Ajapala Nigroda has its name because "it shelters the goats that seek its shade at midday (UdA.51)."