Love In The Extreme 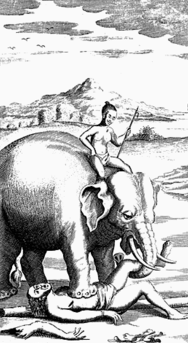 The  Jataka  tells of a group of  friends who do a range of practical things for the benefit of travelers, the very things the Buddha encouraged at  S.I,33. They repaired the roads, cut down trees that struck and broke the axles of passing vehicles, construct bridges, dug water tanks and built wayside rests houses. This aroused the jealousy of a corrupt local official who made false accusations against them to the king. Without investigating the matter the king ordered the men to be trampled to death by an elephant. Immediately dragged off to face their grim fate they had  no chance to defend themselves. As they lay in front of the elephant who was to crush the life out of them their leader, actually the Buddha in one of his former lives, addressed them, saying; “Keep the Precepts in mind and develop metta towards the liar, the king and the elephant as you would to yourself” (Ja.I,199-200).
Of course this is a deliberately extreme story.  It is meant to make us contemplate how quickly, easily and over the most minor matters, we are provoked to animosity and bear grudges. It is saying, in effect, don’t worry about whether it is possible or even good to have love  towards those who would conspire to kill you. See if you can just have a bit of love and forgiveness  for the driver who cuts in front of you, your selfish neighbor, the shop lady who short-changed you, and that guy at work who always contradicts everything you say.
Posted by Shravasti Dhammika at 9:00 PM

As ever, I found your article thought provoking -forcing me to look deeper into myself and my beliefs. Thank you for sharing your views.

Are you the author of following article?

We are searching for the origin of the moonstone, which is going to be auction is London. It is very similar to the moonstone in that article.

If you are the author, did you take that photo? Do you know the exact location of it?

If you have a larger photograph can you send it to us?

Bhante, thanks for helping us.