Gurus I Have Met I

Over the next month or so I am going to write a series of posts about famous and not so famous but nonetheless interesting spiritual teachers I have met, if only briefly, giving my experiences with and impressions of them.  I will start with Muhammad Raheem Bawa Muhaiyaddeen, more widely known as Guru Bawa. 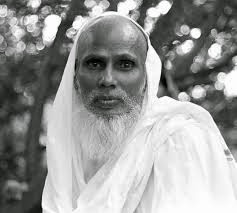 Sometime in either the late 70s or early 80s a Muslim friend told me that a Sufi saint named Guru Bawa was on a short visit to Sri Lanka, his homeland, from the US where he was then living, and was staying in Colombo. “If you would like to meet him I can arrange it”, my friend said. I knew little of Sufism but what I did know impressed me so I said that yes I would like to meet this saint and my friend made the arrangements. A few days later I and a monk friend went to the address we had been given in Colombo 7, which turned out to be a large and rather grand bungalow. As we sat waiting to be shown into the presence an American woman with a pronounced Southern drawl told us all about Guru Bawa. “He’s over 150 years old you know. And he has amazing healing powers, why, Miriam here had cancer and Guru Bawa cured it. And he never eats or drinks. Nothing! He lives entirely on the grace of God.” I took note of all this and out of politeness made a genuine effort to disguise my scepticism. After a while another American woman disciple entered the hall and told us that Guru Bhava would now see us, and she guided us into his room. There before us was a small, rather frail-looking man  of dark-brown  complexion, a wispy white beard on his chin, dressed in pure white robe and turban, sitting on the floor. He bid us welcome, I anjalied him, and we sat down on the floor near him. The first thing I noticed about him was his face. His countenance was one of utter serenity and kindness which together with his gentle smile and shining dark eyes fitted exactly my image of a saint. He asked us about ourselves and while my friend was answering the next thing I noticed was the cup of tea on the floor beside him. He asked me about myself, I told him and then he invited us to ask anything we liked. The conversation continued for some time and while my friend was talking I noticed a cut or abrasion on Guru Bawa’s arm which looked slightly infected and which he occasionally rubbed. I asked him about it and he looked down and examined  it and  said he had had it for a while and that so far the medicine he was taking for it was not having the desired effect. Nothing Guru Bawa said has stuck in my mind. It is his extraordinary demeanour and presence which has remained with me. As for the “he never eats or drinks”  (the cup of tea)  and the “he has amazing healing powers” (the nasty cut on his arm), I suspect  they had  their origin in the adulation and  devotion of his disciples rather than any claim that he himself made.
Posted by Shravasti Dhammika at 4:40 PM

Geshe Michael Roach claims that the "Diamond Cutter principles" could be used to "remove diseases" like gout and cancer, but time and again, he couldn't fix a common health issue among travelers to India. http://michaelroachfiles.wordpress.com/2014/06/16/dangerous-talk/

Isn’t it fascinating how the Buddha’s teaching of simplicity, contentment and austerity has morphed into a program for wealth, good sex, self-assertion and making a killing on the stock market; a program that can be made available at very reasonable costs (discounts for groups).

I remember a defining moment in my life, when I realised that humanity was largely preoccupied by very common sufferings and that the latest "snake oil" or even the latest medical breakthrough, or Diet, generally addressed the same problems or at least claimed some sort of improvement in these common areas. They are in fact, some of the ones that you listed above. Another claim is improved sleep, and I should say that improved, regular sleep will, itself, correct many sufferings in life, up to and including psychosis, in some cases. Sleep deprivation is a common problem for many people and it may be triggered by loss, grief or some sort of medical condition, but not necessarily any of these. Lack of sleep can exacerbate emotional problems, cause emotional problems and cause concentration problems all throughout your daily activities. Put simply, if it goes on more than a night or two, you can find yourself in a deteriorating emotional and physical state. My "revelation occurred during an introductory lecture to a course of TM or transcendental Meditation, and whist watching the plethora of pseudo graphs illustrations and claims, was when I realized I had heard it all before. TM claims were in fact, common to many other solutions on offer in the wider market place.

Looking forward to your articles on gurus and teachers you have met
in the past.