God, Buddhism and the Tsunami
The recent tsunami, the greatest natural disaster in living memory, has given rise to a great deal of soul-searching, not to say ‘theological’ searching. People are struggling to explain the disaster within the context of their religious beliefs. The English papers in Singapore have published several articles and letters on this issue, so far only from the Christian perspective. I would like to make a contribution to this discussion from the Buddhist point of view. There are two sides of this issue - the first is how religions respond to terrible disasters. In this sense we see that all the world religions have much in common. Hindus, Muslims, Christians, Buddhists and Taoists have opened their hearts and their wallets to help the afflicted without regard to their religious affiliations. Buddhists have helped Muslims who have assisted Christians who have helped Hindus.
The second aspect of this issue is how religions explain the tsunami. In this sense there is little agreement between the different religions. In the Straits Times,1st January, Andy Ho wrote an article called ‘Where God was When the Tsunami Struck?’ and on the 9th January it ran an article by Tan Tarn called ‘Evil? No Way, Come Hell and High Water’. Both authors say that disasters like the tsunami cast doubts on the notion that there is a benevolent God. Thus they have raised very legitimate moral and philosophical doubts that have existed ever since people started believing in God. On the 29th January, Edmond Chew wrote to the Straits Times trying to answer the questions raised by Ho and Tarn and also to give his explanation of why God would let the tsunami happen.
Chew’s explanation is a simple one. ‘Actually, the simple reason why God allows evil is that if He did not, then a lot of good would be lost.’ In support of this opinion he quotes Thomas Aquinas; ‘If there is no evil there is no God. For there would be no evil, if the order of goodness were taken away…’ And again; ‘Hence many good things would be taken away if God permitted no evil to exist; for fire would not be generated if air was not corrupted, nor would the life of a lion be preserved unless the ass were killed.’
I would like to examine Chew’s argument from the Buddhist perspective. The first thing that comes to mind afte 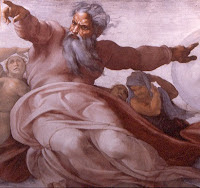 r reading Chew’s explanation is that it seems to severely contradicts the idea that God is a wise, loving and just deity. It is true that evil (e.g. the death, misery and pain of the tsunami) gives us the opportunity to express kindness, concern and generosity. But couldn’t God think of a less cruel way of doing this? Is it fair to inflict suffering on one person just so that another person has the opportunity to do good? If we take Chew’s argument to its logical conclusion we begin to see how problematic it is. Using the same logic we would have to say that cancer is good because it gives doctors the opportunity to heal, that we should encourage criminals to commit crimes so we can define ourselves as law abiding citizens, that we should make war from time to time just so that peace keepers can negotiate a cease-fire.
The third and perhaps most serious problem with Chew’s explanation is that it relegates goodness to the lowly position of being merely a reaction to or a contrast of evil. As a Buddhist I do not need evil to be good, to understand what goodness is or to strive to be good. Evil can sometimes prod me to do good but more often it is the beauty and joy of goodness that moves me to a greater good. It is not reading about Hitler or Pol Pot that makes me try to be good. Rather, it is the Buddha, Gandhi or Mother Theresa who inspire me to a higher virtue. In short, we do not need evil to know or be good and therefore Chews’ explanation of why God lets evil happen is not convincing.
In another letter to the Straits Times published on 29th January, Anthony Yeo said that perhaps the tsunami was ‘God’s megaphone to mankind’. By this he meant that ‘Perhaps God was trying to tell us that we need to take care of the world and live in harmony.’ Yeo may be right but the same objections as given above apply. Could not a loving deity think of a less traumatic and destructive way to get his message across? One could also ask whether laying waste to large areas of coastal Asia is the best way of telling mankind that it should ‘take care of the world.’
I really think it is possible to cut through all these complex arguments and explanations by asking two simple straight-forward questions. ‘If you knew that the tsunami was going to happen and you had the power to stop it, would you have done so?’ I have no doubt that everyone who has even a glimmer of humanity in them would answer ‘Yes.’ The obvious question that follows from this is, ‘Then why didn’t God?’ How one answers this question will depend on what one’s religion is or whether one has a religion. Buddhism has a simple, easy to understand and many people would say, an obvious, answer to this question that does not require convoluted theological arguments. And that answer is ‘Because God does not exist.’
Then how does Buddhism explain natural disasters like the tsunami? In a sense it does not have to explain them! It is only belief in an all-knowing, all-loving and all-powerful God that compels us to try to explain and explain away all the evidence that seems to contradict this belief. When God is taken out of the picture the answer is really very simple. The universe does not conform to out desires and wishes. It takes no notice of us and our aspirations. The earth’s tectonic plates move and sometimes they move in ways that cause destruction. It rains and sometimes it rains too much or not enough and causes distress to humans. There are such things as bacteria. Sometimes they get established in our system and cause us disease. We live in a dynamic universe and sometimes events are to our benefit and at other times to our detriment. That’s the way the world is. Buddhism is not concerned with explaining why this is so, it simply makes the common sense assertion that the universe is dukkha - sometimes at odds with our dreams, our wishes and our desires. What Buddhism is concerned with is teaching us to modify our desires so we are less likely to be in conflict with the way things and how to remain calm and content when they do conflict with the way things are.
Posted by Shravasti Dhammika at 1:52 PM

As you konw, to all "religious" people who believe in the All-powerful and Loving God, everything has to be attributed to Him. So as you know again, they are caught in this cycle of yo-yo contradictions each time they try to justify their belief with illogic rationailzation.

Very uncomfortable indeed to see the rising number of "born again" Christians (many are surprisingly educated intellectuals) yelling their heads off even praising God for such monstrous disasters!

The most destructive part of this discussion is that you may get your head chop off if you insist that God does not exist!!

Very interesting post!
I am very new buddhism, i have a few questions ask if you may. What about buddhist scripture that says if you chant this scripture, it will cure you from sickness and void you from pain and etc. Wouldnt it be contradicting the nature causation? And temples set up where people will pray for safety and such? Thank you. Sorry if isnt true at all about those mantra or i am being ignorance.

I took the liberty to inform the TMY Forum @ http://groups.yahoo.com/group/theravada-my/
on your latest post relating to their thread of the same topic. You will receive high volume traffic from to-day.

Dear Sagicaprio
sorry to remove your comment but here in Singapore one has to be 'sensitive' Delete the 'hate' and the comparisine with 'Satan' and I make your coments again.