Paintings of Buddha dating back at least to the 12th century have been discovered in a cave in Nepal’s remote north-central region by a team of international researchers who were tipped by a local sheep herder. A mural with 55 panels depicting the story of Buddha's life was uncovered in March, with the team using ice axes to break through a snow path to reach the cave in Nepal’s Mustang area, about 160 miles northwest of the capital, Katmandu. ‘What we found is fantastically rich in culture and heritage and goes to the 12th century or earlier,’ Broughton Coburn, a writer and conservationist from Jackson Hole, Wyo, US., told The Associated Press recently. Coburn said the 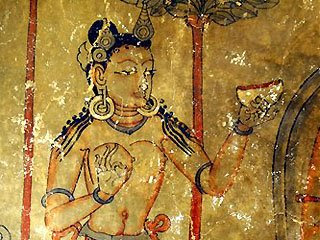 main mural measured around 25 feet wide, and each panel was about 14 inches by 17 inches. The team of Nepalese, Italian and American archeologists, art experts, and climbers, were tipped by a local sheep herder who mentioned that he had seen a cave with old paintings several years ago when he took shelter from the rain. ‘I was overwhelmed with questions,’ Coburn said about the discovery. Besides the main mural, paintings were discovered on other walls of the cave which they believe were made slightly later. A nearby cave had manuscripts which were written in the Tibetan language, which were photographed by the team and will be translated by experts. Coburn said the team planned to perform limited excavation, collection and cataloging of the manuscripts. The team has refused to reveal the exact location of the caves, fearing visitors could disturb the centuries-old art. The expedition spent three weeks in the remote mountainous area, where there are few people due to the extreme weather and barren land. ‘We learnt how much we don’t know, how much there is to discover, explore and understand,’ Coburn said, adding they plan to return to the cave next spring to conduct more research. The area has for centuries been used as a major passageway between Nepal and Tibet. Taken from the interned.
Posted by Shravasti Dhammika at 3:15 AM