Because They Care About AWARE

The widely anticipated AWARE extraordinary general meeting was held yesterday (2nd May) and attracted over 3000 people, most of who had joined the organization in the last few weeks (See post of 28th April). After seven hours of shouting, boos and accusations, the motion of no confidence against the (usurping) new committee was passed by an overwhelming majority and before they could resign they were replaced by a new committee made up mainly of old (original) members. To their credit, the (usurper) new committee took the barrage of criticism against them and their ignominious dumping coolly and calmly, in fact, with the same cool and calm they displayed when they had infiltrated and underhandedly taken over AWARE only weeks before. For me, the verbal highlight of the seven hour meeting was when Thio Su Mien said that the (usurping) new committee was for 'openness' and someone shouted 'Then why did you have all the locks (on the AWARE premises) changes when you took over?' The outcome has been a stunning victory for common sense and progress over narrow and retrograde religiosity. However, it seems to me that the AWARE affair might be a pointer to several distinct and positive changes taking place in Singaporean society. 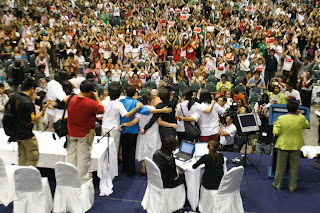 Photo credit Online Citizen
Until recently Singaporeans have tended to have a passive indifference to social issues, and an anxiety to getting involved in anything deemed 'controversial' - and just about anything was thought to be 'controversial' even when it wasn’t. Most observers have expressed surprise at how much comment the AWARE affair has generated amongst the general public. In this case, newspaper coverage of the affair, which previously would have probably been low-key, has helped create the interest, and the internet has kept it well and truly alive and kicking.
The affair might also signal a change in perceptions of and attitudes towards religion in general and Christianity in particular. The Anglican archbishop of Singapore, representing the National Council of Churches, said 'We do not condone churches getting involved in this matter; neither do we condone pulpits being used for this purpose', a reference to Rev. Derek Hong's sermon last Sunday in which he urged the women in his congregation to stack the upcoming AWARE extraordinary general meeting so that the usurpers could keep their grip on power. Strangely, the archbishop hardly alluded to the thoroughly deceitful way the members of the Church of Our Savior had taken over AWARE, and his comments came quite late in the day. One gets the feeling that he was more concerned about the bad publicity the affair was generating for the churches than by all the subterfuge and dishonesty. But perhaps I'm wrong.
Other Christians were far more unequivocal. A group calling itself 'Concerned Christians Against Fundamentalism' described themselves as 'A group of Christians who believe that the New Guard of AWARE is giving our faith and religion a bad name'. Their wed site went on to say, ' Join this group to signify your commitment to a Christianity that is free from crass manipulation and the degradation of our faith. 1: We do not condone the takeover of secular organizations by Christian fundamentalist groups. 2: We believe in Facts, not Fabrication. 3: We believe in Dialogue, not Lies. 4: We believe in a God of Love, not a God of Hate'. A small but significant number of Christians turned up at the EGM to support the (original) AWARE and others have written to the press. One of them was reported in the Straits Times as saying, 'I do not want my children learning that as Christians, they have the right to impose their beliefs on others via underhand tactics'. Up to now at least, fundamentalist Christians have had the highest profile in Singapore, they have muscled into centre stage, giving many people the impression that Christianity is a narrow, strident and intolerant faith. Perhaps the AWARE affair has made these (What can I call them? 'Moderate Christians?' 'Nice Christians?' 'Genuine Christians?' I'll settle for 'Christian Christians') Christians decide that have had enough of the fundamentalists and that they are determined to show that their faith can have a 'kinder, gentler' side too. If so, this will be a very welcome change and good for Singapore's multi-religious society.
Another change the AWARE affair may be heralding is a more informed, sympathetic and relaxed attitude to sexual minorities. Although homosexuality actually had little to do with the whole affair - the (usurping) new committee's claim that the old committee was promoting homosexuality has been shown to be false - the subject has been dragged into the debate. Of the huge number of comments on the internet about the AWARE affair, a majority have expressed disapproval and disgust at the improper way the (usurping) committee took over. But a significant number of others also expressed the view that they disagree with discrimination against homosexuals and that they stand for acceptance and understanding. This too is a good thing and a sign that Singaporeans are changing for the better.
After being replaced, the defeated (usurping) new committee made a short statement in which they said that they were graciously stepping down and that they wished AWARE well. 'Gracious?' Well, maybe. Well-wishes? Okay, if you say so. But honestly, I think people shouldn’t be too hard on this truly pious group of women. After all, when you are doing Gods will, rules and propriety shouldn’t have to apply to you.

Well, all the excitement is over. Tomorrow I'll return to more edifying matters.
Posted by Shravasti Dhammika at 2:27 AM

I was there at the EGM and the atmosphere was really electrifying when the voting results were announced.

And it was very very inspiring the moment when Josie Lay declared that her gang and her to resign.

The feeling was like 'justice finally prevails on this land!'

I was never so glad or so proud to be present at this event in Singapore history--it will be difficult for me to think of Singaporeans as "apathetic" after this. People were passionate, engaged, eloquent, and I saw a lot of kindness on the part of the volunteers, calm in unexpected places (on the faces of the insurgent exco, you could say) and I think many Singaporeans were probably as surprised as I was at the level of participation. Despite people calling the event rowdy and uncivil, I was so happy to see so much excitement and energy in one place. Much better than a rock concert! And very inspiring.

(And it was great to meet you at Venerable Thubten Chodron's talk tonight!)