The Kalmaks are a group of Mongol people who make up the largest ethnic group (53%) in the Republic of Kalmykia, a part of the Commonwealth of Independent States. The majority of Kalmaks are Tibetan Buddhists of the Galupa sect and is thus are Europe's only native Buddhists.
The nomadic Kalmyks migrated from Central Asia to in the 17th century but this soon brought them into contact with the easterly expanding Russian Empire. Much of their history since then has been a struggle against the Russian desire to eliminate them. Eventually Russia conquered the Kalmyks and began a relentless campaign eliminate their identity. As has often been the case, Christianization was the first step in this process. Kalmyk chiefs were given official recognition, land and salaries if they converted to Russian Orthodoxy, and some did. Later, German and Russian immigrants were given the most fertile land, pushing the Kalmyks onto the least productive areas and improvising them. Despite this, most Kalmyks retained their faith and contact with religious centers in Tibet continued. But with the coming of communism the Kalmyks were to face their most testing times. The popul 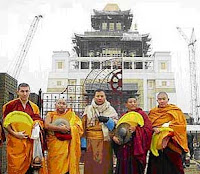 ation was decimated by forced collectivizing and the subsequent famine, all supposed 'kulaks' were shot, then in the late 1930's all monasteries and shrines were razed and all monks murdered or driven into exile. The Nazis invaded the Kalmyk lands during WW II. and when they were driven out, Stalin accused the Kalmyks of being collaborators and in the middle of the winter of 1943 the entire population was deported to Siberia. It is estimated that a third of the population died during the deportation and of the survivors another two thirds perished in the subsequent hardships. The Kalmyk Oblast was divided amongst other regions, all Kalmyk names were changed to Russian ones and in effect the Kalmyks, their culture and their very existence disappeared. In 1957 the dispirited and broken remnants of the Kalmyks were allowed to return to their traditional homeland only to find themselves strangers there. Buddhism and all expressions of Kalmyk culture and identity were still firmly suppressed. This long martyrdom ended in 1990 with the collapse of the 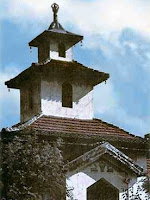 USSR and the establishment of the Republic of Kalmykia. But reestablishment of Buddhism had been slow, hardly surprising. During the early Soviet period Kalmyks who were able to fled to Europe and those in Belgrade built the first Buddhist temple in Europe outside Russia in 1929. A few Kalmyks managed to escape in the 1930 and eventually settled in Philadelphia in the US, one of these being the famous Geshe Wangyal. A boy born into the Kalmyk community in 1970's was later recognized at Telo Rimpoche, the senior Kalmyk lama. He underwent a proper Buddhist training and when the Soviet Union collapsed returned to Kalmykia. However, he could not speak the language and soon tired of being 'special', finally returning to the US and marrying. He has recently renewed his interest in Dhamma and in his people. The greatest threats to the Dhamma amongst the Kalmyks is an almost complete absence of teaching monks and the presence of evangelical Christian missionaries. However, the Kalmyks have survived worse than this before. Hopefully they can survive the new challenges.
The bottom picture shows the Belgrade temple.
Posted by Shravasti Dhammika at 2:36 AM

Thanks again for your educational postings.

Daer Bhante and friends
an excellent online exhibition on history of Belgrade Kalmyk's and their temple is posted at
http://www.members.tripod.com/budisti/index.htm

Unfortunately it is in Serbian only :((
But at least you can see the pictures...

Dear Bhante,
thanks for your - as always - interesting post!

You said a few weeks ago that you will come to visit Germany in May - i'm just curious what you will be doing here and where exactly are you going, maybe theres even some time to meet??
Hope to hear from you!

Dear Brakus,
Thanks for the link to the interesting information about the Kalmyk Belgrade temple.
Dear Domster,
Please give me your email address and I'll tell you about my itinerary.It would be interesting to contact you.

Excellent. Kalmykia and Tuva have been on the list of destinations for some time... this is a good reminder to actually do something about it.

dear all,
about the first buddhist monastery in Europe i have read this interesting book: Buddhism in Russia: The Story of Agvan Dorzhiev: Lhasa's Emissary to the Tsar
by John Snelling.
Also Kalmukk people were somehow involved.