A friend who used to live in Singapore and has now returned to the West recently wrote to me of her experiences at and impressions of the Shambala Training courses that she recently attended. I found her comments thoughtful and interesting so I thought I might share them with you.

'Thank you for sharing your thoughts with me. Actually, I have done two "levels" of Shambala courses, both were weekend courses. I liked the first one well enough to go on to the second several months later, but after the second I felt maybe I'd had enough. I think the teachings are fine and the meditation training is good. At the end of the 2nd level, the instructor gave me as a present a postcard of their current "leader", Sakyong Mipham, who is Trungpa Rimpoche's son, taken at his wedding some princess he married, which I thought was rather odd. Was I supposed to put it up on my wall or what? I've read one of Skyong Mipham's books and went to a talk of his in Singapore before I knew anything about Shambhala, and certainly feel, at least on the surface, he's on a lot more solid ethical ground than his father. But there is som 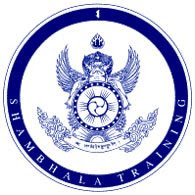 ething just a bit too slick, polished and up-market about the presentation that made me uneasy. I also found it odd that in Singapore, although Sakyong wore robes, all his "minders" wore business suits. I mean, they're not monks, so they wouldn't wear robes, but why suits and ties?) I also wondered whether he is the Shambala leader because he has any particular insights or teaching abilities or because he is his father's son. Is it just me or do some Tibetan Buddhist groups have a family business character to them? I find that Sakyong's version is as much rooted in the culture of our times as Trungpa's wild excesses were. He uses a lot of sports, health and physical training metaphors and images and somehow has a kind of "corporate, media-friendly" sort of vibe. If I think about it, there's nothing really wrong with reaching people where they are, but somehow the feeling of 'packaging' is rather off-putting.
Also, at the second course I did, someone else became a member of Shambhala and got a badge, which felt a bit like the Scouts to me, although that is probably partially my non-group-joining prejudice, a weird kind of arrogance of the Grouch Marx "wouldn't stoop to join any club that would have someone like me as a member" variety. It was also after the second course that I read on the back of a book that Trungpa Rimpoche had died very young and couldn't find any explanation about that in Shambhala materials, so went to the internet and found out all the rest of it! That left me feeling very negative. It really felt like a cover-up and I guess I felt a sense of betrayal. But I think it is something of this up-market feel to it now that strikes me as somehow not genuine. The people who go there seem mainly of the 'shiny happy' variety, not the ordinary mortals whose presence I find quite reassuring.
But it seems to me that in Shambhala there is a bit of a rarefied atmosphere that can come close to selfishness; people on a spiritual path for their own personal development, without much concern for helping others. I know you talk about this problem in Buddhism in general, so I don't think it's confined to Shambhala. But having had some background in the Christian faith, I'm used to that element of serving others that appears in churches, even if it's on a very basic level like a food drive or collecting old clothes for a charity, things which serve the purpose of bringing people together in a common cause that they can feel good about and also has some actual benefit for others. But then my involvement with Shambhala here has been quite limited, so I don't know for sure what kinds of things the members do'.
Posted by Shravasti Dhammika at 2:07 AM

I have come to the conclusion that indians ( and tibetans too?) visited the ancient republic of Rome, which they call Shambala, Rome or Shambala was then the most advanced civilisation on Earth. It is the model for the later the development of all countries on this planet. And accidentally Rome's calendar (the kalacakra or the wheel of time)is in use all over the modern world.