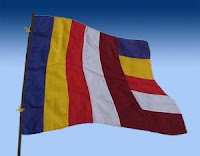 A halo (byamappadha or pabhamandala) is a ring of light believed to appear around the head of particularly saintly people. Ancient and modern depictions of the Buddha often show him with a halo although the Tipitaka never mentions him having one. However, it does say at the time he attained enlightenment rays (ramsi) of blue, yellow, red, white, orange light emanated from his body (Vin.I,25). The flag (pataka or dhaja) now widely used to represent Buddhism and has been flown widely in different places around the world over the last few days, was designed by the American Buddhist Henry Olcott in the 1880's, as a part of his efforts to unite the Buddhists of Sri Lanka in their struggle against foreign missionaries. The flag is rectangular, with six vertical bars - blue, yellow, red, white, orange and finally a combination of all five. These stripes represent the coloured rays that emanated from the Buddha's body when he attained enlightenment.
It is interesting to note that in the hours before his passing his skin became extraordinarily clear and bright (D.II,134). This transfiguration as it is called, is also supposed to have happened to Jesus just before his arrest.
Posted by Shravasti Dhammika at 1:17 AM

Did the scriptures give meaning to the colours of light that were emitted?

No, although I suspect that they are based on or influenced by the medical theories of the time which included the idea that bodily fluids have take on different colors according to one's mental state.