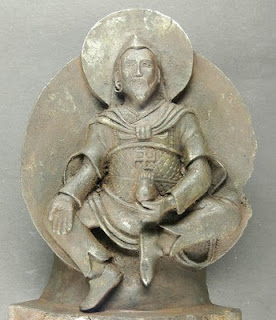 Buddhism rarely if ever gets into the international news unless it’s something bizarre or quirky or embarrassing. Well, its recent mention is certainly bizarre and quirky although thankfully not embarrassing.  All the ideas the Nazis held were odious and twisted but the most harmless, although just as bizarre as the others, was the notion that the Aryan race originated somewhere in Central Asia; at least Heinrich Himmler thought this probable. In 1938 he financed an expedition to Tibet to find evidence of this. You can read the whole story as and see the photos the expedition took in   Tibet – 1938-1939 (2007) edited by Isrun Engelhardt.  Amongst the artefacts the expedition brought back was a statue made out of some unusual metal that looked something like aluminium. Now Prof. Elmar Buchner of the University of Stuttgart has determined that this statue was actually made from what astronomers refer to as the Chinga Meteorite which hit the Earth in what is now Mongolia some 150,000 years ago. This claim is based on an analysis of the metal in the statue and the fact that it was made in Mongolia before being imported into Tibet at some later date. News reports say the statue is 1000 years old which judging by its style is highly unlikely. Some reports say it is represents Vaisravana although it looks like some king or worrier to me. The Nazis in the expedition, and only Bruno Beger was a true believer, were probably attracted  to the statue by the swastika on its chest.
Posted by Shravasti Dhammika at 10:00 PM

Just when you thought you've heard it all, along comes another "fascinating" blast from the past. Apparently the Nazis were also taking "Phrenological" measurements of Tibetan peoples heads to support their supposed racially Aryan status. So scientific!

"Within the scope of our studies, we were
not able to clarify the definite identity and age of the ‘‘iron man’’
meteorite sculpture. The statue fulfills some fundamental criteria that
argue for the identity of Vais´ravana. However, we are aware of the fact
that many figurative illustrations of Vais´ravana significantly differ
from the ‘‘iron man.’’ Younger illustrations of this deity (particularly
in the timespan after approximately 1000 AD) portray Vais´ravana (or
Jambhala) as a corpulent figure that holds a mongoose, which spews
jewels from its mouth (e.g., Fisher 1997). Subsequently, the
illustrations of Vais´ravana became increasingly corpulent and opulently
decorated by jewelry and accompanying ghosts and demons. According to
Schiffer (1940), statues of ghosts at the feet of Vais´ravana appear
from the second half of the eight century onward. From our
preliminary ethnological-art historical findings, we assume that the
‘‘iron man’’ is an early portrait of Vais´ravana. However, the statue
might as well represent a religious dignitary or another person of high
standing that was portrayed with the regalia and in the posture of
Vais´ravana. As a further possibility, the ‘‘iron man’’ could be a
stylistic cross-over between Bon and the subsequent Buddhist art,
exhibiting elements of both. According to this interpretation, the
possible provenance of the ‘‘iron man’’ is western Tibet or anywhere in
the area of Buddhist influence and the age can be tentatively dated at
the eighth to tenth century (compare to Fisher 1997, pp. 12–13). The
ancient tradition of meteoritic artwork in Tibet (Berzin, personal
communication) and the entire Buddhist area is in good agreement with
these age estimations. The provenance of the meteorite used for the
statue strongly points to the Tanna-Tuva region in the border area of
eastern Siberia and Mongolia. We must speculate whether the piece of art
was produced either in Tibet or in Mongolia, and subsequently brought to
Tibet. We hereby would like to encourage our colleagues (in particular
archeologists and ethnologists) to communicate any cognitions or ideas
to us with respect to the identity, age, provenance, and religious role
of the ‘‘iron man’’ sculpture."

Dear Massimilino, thanks for this additional information.

Dear Shravasti,
I know this is not related to the above subject, but I don't know how to contact you to ask my question & hear your view about what the trend of "Forced Christian burial procession" in my country Indonesia. In this case, a Christian son/daughter has forced the whole burial procession be done in Christian faith, against the will of the dead & the Buddhist children.
This happens often in my big family, and creates mental pressure to the Buddhist children as they fail to fulfill his mother/father's last wish. The reason why "acceptance" is simple...to avoid arguments during the dead procession, which is deemed as "improper" behavior in public display. But then, should Buddhist always retreat to the corner & let themselves be undermined & assume the guilt of failure (of fullfilling his/her father's last wish). You know, in chinese culture, the last wish of a father/mother is almost sacred. The failure to comply is a tremendous pshychological pressure because the son has failed to prove himself/herself as a good son.

Similar cases happens everywhere in Indonesia (esp Chinese community), where a person in coma has been forced to convert to Christiantiy by simply relying on slight body movement (or eye movement) as a sign of agreement.

This is mainly done by the Fundamentalists & Evangelicals.

I'd really like to hear your view on this subject either personally, or even better publicly on the blog, so all people can read. Thank you

Dear Serville,thanks for your message. Please contact me at pitijoy@yahoo.com

Dear Serville,thanks for your message. Please contact me at pitijoy@yahoo.com