Has The Medium Got The Message?

We have just had a tragedy here in Singapore. Two 16 year old youths jumped from the 9th floor of a building and died. Six others had planned to join them but pulled out at the last moment. Who or what was responsible for this shocking tragedy? Religion! Or I should say a particular religious belief; the belief that it is possible to communicate with divine beings. Ku Witaya, a spirit medium, was convinced that if he and his friends died they would be reincarnated at warriors in the coming World War III and battle demons, an idea picked up from a video game called Slayers. One-way communication with a deity (prayer) is acceptable I suppose; two-way communication (mediumship) is fraught with problems. When you pray you inform God what you want, thank him for what he has given you and or tell him what you think of him. You feel goo 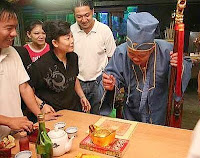 d and if he’s really there presumably he feels good too. In mediumship something is added to this, you get instructions on what to do or information about what’s going to happen. Mediumship is very widespread in Singapore. In Shenism, Chinese folk beliefs (incorrectly called Taoism in Singapore), many temples have mediums who are regularly consulted on a wide range of subjects, including quite important ones. I have seen some of these mediums in action and I must say, I was very impressed. Some of them must be faking it, but the ones I saw were defiantly in trance states and absolutely believed they were communicating with God or gods.
When young Singaporeans become more Westernized, wish to appear smart or to please their friends, they abandon the smoky and sometimes untidy Chinese temples and start going to Christian churches. There the mediumship is of a much more ‘modern’ form and it is buttressed by intensive religious instruction, scriptural authority and ‘witnessing’ by those who vouch for its validity. But whatever variety of mediumship you go in for, it is as I said before, fraught with problems. When I ‘channel’ messages from God, whether occasionally or on a regular basis, whether for my personal use or to give to others, how do I know it’s him speaking to me and not just my imagination? When I’m given messages from on high by a ji tong or a pastor, how do I know he’s genuine and not deluded or a charlatan? Most people who believe in God also believe in his opposite, sometimes called Siong Shen or Satan. This being is dedicated to using all his wiles to harm and deceive. How do I know the message I’m receiving, either directly or through the medium, has not been ‘intercepted’ and distorted by this Evil One?
Mediums are notorious for ‘receiving’ information that turns out to be wrong – or perhaps it’s the message-send

er who gets it wrong! The famous American televangelist Pat Robertson regularly gets communications from God. His divine predictions are interesting because he usually announces them on TV so it's possible to later prove whether they were accurate or not. So far, they have all been wrong. For example, two years ago he prophesized that a huge terrorist attack on the US was imminent. In 2006 he predicted that a tsunami would strike the US that year. In 1976 God told him that the world was going to end in 1982. Incidentally, I’m have been told that there is a very exclusive society in the US only open to those who have confidently predicted the end of the world. They have a membership of 123,000 and a past membership of three and half a million.
Getting predictions about the future is one thing, receiving guidance on what to do is another. About two years ago a man came to see me, introduced himself and then airily announced, ‘God has told me to come and talk with you’. Without missing a beat I replied, ‘Pity he didn’t tell me, because I have an appointment in 20 minutes and have to get ready’, I walked passed him and went up to my room leaving him standing there. Apparently some of these divine instructions are very precise and specific, like this one. In this case as with most others, acting on the divine message only caused minor inconvenience to the receiver. But I know of many others where it led people to take dangerous substances, refuse medical treatment, stop taking medication, bring a mentally disturbed child to church instead of a social worker or psychiatrist, fork out large amounts of money, sell their house and move somewhere else, turn against a spouse, etc. Occasionally it leads to people losing their lives.
To know something about Shenist (Taoist) mediumship and mediums have a look at
http://www.spi.com.sg/spi_files/tangki/main.htm
Posted by Shravasti Dhammika at 1:03 AM

As my old philosophy professor said, "you can't argue with someone who says they're god."

Here in the Midwestern U.S. the Christian form of mediumship is very common. It seems like any thought that comes into certain Christians' minds is a prompting from the holy spirit, they believe. But it's not only Christians of the Pentecostal variety who believe that they're hearing a divine voice within. Many people who subscribe to more metaphysical beliefs can tend to believe that any impulse or desire is divinely inspired. Some of these divine inspirations can be quite silly and comical! What to buy, what to eat, how to dress, and even more important decisions must be based on the still, small voice within. I guess these types of people just don't trust themselves to make the right decisions, so they feel that they're receiving messages from a higher power and are therefore off the hook if things don't work out.

Eek, this brings up lots of interesting memories for me. I've seen some pretty crazy stuff, too. When I was a Charismatic Christian I hung around some really flaky (and shady) individuals. The worst stuff I saw were the faith healers, especially the ones that would encourage people to quit their medications.

I'm not saying this kind of stuff doesn't happen in Buddhism (surely somewhere on this planet some Buddhist is doing some just as flaky), but I'm glad that the Dharma doesn't require me to check my brains at the door.

Indeed it is not uncommon in
Singapore to hear people in my religious tradition saying something like "God told me..." or "God showed me..." and I would quietly voice this in my own mind: "How do u know it is really God who did that instead of some other causes such as the trick of your own mind or some other beings?" Next time I should voice my thoughts out, haha...