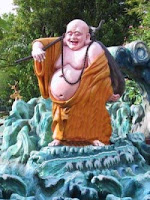 The so-called laughing Buddha is a character popular in Chinese and Japanese folk belief and has its origins in a welding together of the identities of semi-historical monk Che’tz and the bodhisattva Maitreya (Chinese Mile pusa). Che’tz lived in 10th century China and was widely loved for his eccentric behavior, his way with children and in particular, his open, friendly manner. He was also very obese and used to carry a bag full of knickknacks over his shoulder, for which he was also known as ‘Big Bag Monk (Buti’shang). In later centuries, popular imagination came to identify him with Maitreya, the Buddha of the next era, probably because Maitreya’s name means ‘The Loveable One’ and he too was thought of as being a friendly, benign individual. Eventually, Maitreya came to be depicted like Che’tz; bald-headed, rotund, and broadly smiling or laughing. Although learned Chinese Buddhists always distinguisher between the two, the majority of simple folk did not, and gradually looked upon Che’tz/Maitreya as a god of prosperity, abundance and good luck.
In some ways the so-called laughing Buddha is similar to Saint Nicolas in the Christian tradition. He was an entirely legendary character who later became a saint in the Church and eventually evolved into Santa Claus, a friendly old man who dispenses gifts to good children.
Posted by Shravasti Dhammika at 4:17 AM

I remember reading about this Chan Buddhist monk, but his name was given as Hotei... I wonder if it is the same person.

There is also a version where we see 5 kids climbing over his body. That symbolyzes the 5 sense-doors: eye, ear, nose, tongue, body. The sixth kid (= mind-door) is hidden in his head. This version means that Hotei is not disturbed by those six objects.

There is an apparently old tradition in Mon, Burmese, and Lao traditions of Ven. Gavampati who was said to physically resembled the Buddha, which he regretted. To keep from being mistaken for his revered Master, he altered his form and made himself into a fat, hunchbacked dwarf.

Does this have any textual support or relevance here?

Dear Budsas,
Thanks for the extra info about our rotund friend. Not only do the six children represent the senses (and the mind), they are usually depicted pulling his ear lobe, pinching his nipple, etc. while he good-naturedly looks on unmoved. This represents a very important idea – that we should not ‘hate’ or ‘fight’ sensory impingement but develop a tolerant and observing attitude to it.

Dear Ken and Visakha,
A Venerable Gavampati is mentioned in the Tipitaka (S.V,436) but not the story about him from the Mon, Lao and Burmese traditions that you recount. There are some legends about him in the Sasnavamsa (Burma 19th cent) but again not the ones you mention. It must be a local popular legend.